A Country Road, A Tree

LoveReading View on A Country Road, A Tree

It’s autumn, 1939 and a young writer has returned to Paris, and to Suzanne, his lover and anchor. “He didn’t have to come back. But here he is”, a “pale and wounded Irish man”, without the necessary papers, but ready to make an impact with his art, ready to do something of worth. Then Paris falls, his friend (James) Joyce departs, and soon “Paris isn’t Paris any more”. Associates are taken, Gestapo presence is ever more pervasive and, at huge risk, he joins the Resistance, while also questioning the value of a writer’s work.

Throughout, the writing possesses an effecting sparseness, from the early domestic scenes with the writer’s family, “all shiny buckled shoes and neat cardigans”, to the bleakness of Occupied France (the hunger, the acts of cruelty, the creeping fear and despair). This novel is both a profound portrayal of an artist’s inner life, and of his engagement with the ravaged world outside. It’s also a testament to a spirit of survival, to finding “decency amongst the ruins”. ~ Joanne Owen

The Walter Scott Prize Judges said:
‘We loved the quiet, lyrical, beauty of this novel and its skilful recreation of Samuel Beckett’s years in France throughout the Second World War. It’s illuminating about Beckett’s individual heroism and humanity. The descriptions of France under occupation are always surprising and moving as he (and Baker) chart the horror, despair, starvation and uncertainty of those years with a writer’s eye. Central to the narrative is Beckett’s love for Suzanne, the young French woman he eventually married. The strain of five years of war, their escape from Paris, their long walk to Roussillon and their repeated separations takes a heavy toll on their relationship. But through all of this their quiet love survives.’

A Country Road, A Tree Synopsis

Paris, 1939: The pavement rumbles with the footfall of Nazi soldiers marching along the Champs Elysees. A young writer, recently arrived from Ireland to make his mark, smokes one last cigarette with his lover before the city they know is torn apart. Soon, he will put is own life and those of his loved ones in mortal danger by joining the Resistance...Spies, artists, deprivation, danger and passion: this is a story of life at the edges of human experience, and of how one man came to translate it all into art.

'[It is] the unexpected Beckett that is on show here. Baker pays tribute to a man who joined the French Resistance, narrowly escaped the Gestapo, fled south on foot and went into hiding, and was eventually awarded the Croix de Guerre' The Times 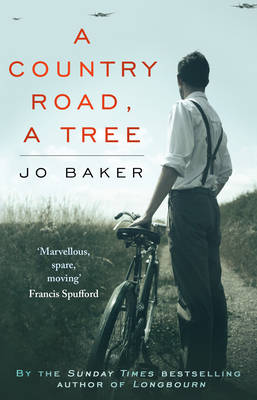 Jo Baker was educated at Oxford and Queen's University, Belfast. She lives in Lancaster with her husband and their two children. She is the author of the bestselling Longbourn, which is due to be made into a film. Her latest novel is inspired by the life of Samuel Beckett. Author photo © Ed Marshall, Time Out , Camera Press London

View All Books By Jo Baker