A first British crime novel, albeit set in a small American community, that appeared a few months ago and only recently came to my attention, Tall Oaks takes a sometimes hackneyed theme and turns it into a thing of wonder. A small child has gone missing, apparently kidnapped and we follow how a group of varied inhabitants of Tall Oaks are affected by the disappearance in an atmosphere reminiscent of both Twin Peaks and Fargo, as the tale that unfolds sensitively blends pathos and even tragedy with an affectionate sense of the absurd and the comic. The grieving mother falls into a downward spiral of despair and degradation, the errant father remains suspiciously absent and uninvolved, the policemen investigating the case obstinately fights against the odds and his own, terrible attraction to one of the suspects, a group of local teenagers, including a splendidly comic figure who aims to become the town's master criminal and dresses ridiculously to cultivate his image, his Syrian refugee acolyte and sidekick, the slightly retarded mother's boy who works at the photo shop, a forlorn waitress and a host of other striking characters take the stage in turn as the story develops and races to a both abominably poignant and also comic conclusion that ties all the threads together most satisfactorily. A gem of a story. Stunning. ~ Maxim Jakubowski

Tall Oaks is an idyllic small town, until the disappearance of a young child throws the tight-knit community into crisis. Jess Monroe, the boy's distraught mother, is simultaneously leading the search and battling her own grief and self-destructive behaviour. Her neighbours watch on, their sympathy masking a string of dark secrets. This is a small town where nothing is as it seems, and everyone has something to hide. And as the investigation draws towards a climax, prepare for a devastating final twist...Dark but laugh-out-loud funny, full of suspense and packed with twists, this brilliant new thriller is like nothing you've read before.

What To Read After Tall Oaks

'Set in a small California town with a high ratio of weirdos, this quirky debut from a former City of London trader entertains and intrigues' The Sunday Times Crime Club

'Manny is a brilliant mix of bravado and teenage angst. This character gives the novel an extra little sparkle which makes it worth seeking out' Reviews Revues

'The supporting cast includes Manny, a podgy, potty-mouthed teenager who wants to be a gangster and who swelters in his woollen three-piece suit and too-tight fedora as he tries to extort money from local shopkeepers, and Jerry, the mountainous, slow-witted manager of a local photo store. They are an absolute delight...highly original...the combination of verve, humour and pathos make it well worth a read' -- Laura Wilson, The Guardian 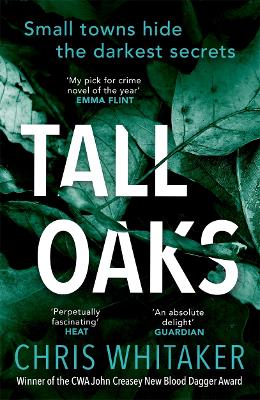 Chris Whitaker's debut novel, Tall Oaks, was published in 2016 by Bonnier Zaffre. It was a Guardian crime book of the month as well as featuring in Crime Time's top 100 books of 2016 and BuzzFeed's incredible summer reads. Chris's second novel, All The Wicked Girls, will be published in autumn 2017. Chris lives in Hertfordshire with his wife and two young sons.