How to be Human

LoveReading View on How to be Human

Longlisted for the Desmond Elliott Prize 2018 | April 2017 Debut of the Month.

Here is a woman, Mary, who desperately needs something and even we, the reader, are not entirely sure what.  She has just split with a long-term boyfriend, Mark, the final bitter row being over commitment and not wanting a child.  The next door neighbours have a toddler and a new baby girl.  Mary babysits and forms an attachment with the baby which becomes complicated when the child is dumped on her later.  It is the age old dilemma; no she does not want a child ... but then maybe she does.  A magnificent dog fox appears in her overgrown garden, an area that backs onto a bit of scrub land.  There are passages when we become aware of his thoughts and so eventually discover he is mourning his vixen.  We are in East London.  Mary develops an friendship with the fox, as indeed does he with her, or so we are led to believe.  But again is he real or is she suffering from some delusion, edging on a mental breakdown?  Is the fox a symbol for a need to care, nurture, protect, belong, or is he actually there?  This is fascinating stuff.  A tale of obsession which is unsettling, powerful and hypnotic.  An original debut.  I was fascinated to learn that there are ten thousand foxes roaming London.

How to be Human Synopsis

You've seen a fox. Come face to face in an unexpected place, or at an unexpected moment. And he has looked at you, as you have looked at him. As if he has something to tell you, or you have something to tell him. But what if it didn't stop there? When Mary arrives home from work one day to find a magnificent fox on her lawn - his ears spiked in attention and every hair bristling with his power to surprise - it is only the beginning. He brings gifts (at least, Mary imagines they are gifts), and gradually makes himself at home. And as he listens to Mary, Mary listens back. She begins to hear herself for the first time in years. Her bullish ex-boyfriend, still lurking on the fringes of her life, would be appalled. So would the neighbours with a new baby. They only like wildlife that fits with the decor. But inside Mary a wildness is growing that will not be tamed. In this extraordinary debut, the lines between sanity and safety, obsession and delusion blur, in a thrilling exploration of what makes us human.

How to be Human Press Reviews

'How to Be Human is an intriguing and subversive debut, an eerie tale that acts on the reader like a ghost story, charged with the power of the ignored and the suppressed. If we disdain our animal selves, they trail us, shadowing us at dawn and dusk. Paula Cocozza shows us that the line between the wilderness and the city is thin, easily transgressed; the ghost breathing in the thicket is our own wild nature.' -- Hilary Mantel

'Intriguing and unsettling ... the tricky, shifting substance of relationships is so insightfully drawn and constantly surprises.' -- Laura Barnett, author of THE VERSIONS OF US

'Paula Cocozza's intense, fox-like powers of observation allow her to stalk the claims of territory and hidden wildness that energise this taut, shimmering novel.' -- Richard Beard, author of ACTS OF ASSASSINS

'Eerie, original and subversive, How to be Human is a fascinating yet disturbing look at obsession, delusion and loneliness . . A thrilling exploration of what makes us human.' i 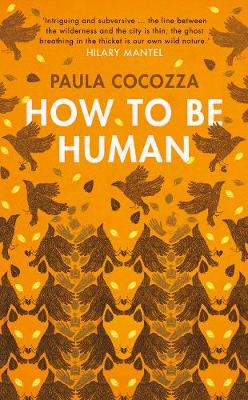 Paula Cocozza is a feature writer at the Guardian and completed her MA in creative writing at the University of East Anglia, where she was the 2013/14 recipient of the David Higham Award. She lives in London and this is her first novel. Author photo © Christian Sinibaldi

View All Books By Paula Cocozza