Herron's Slough House series just keeps on getting better and better, both on the sly humorous front and with the Machiavellian variations it offers on the levels of deception that operate within the British secret service. This is John le Carre territory with added dollops of sheer mischief as well as pathos as familiar, larger than life characters navigate another tortuous case, with the monstrous but endearing boss of the disgraced spy unit Jackson Lamb as ever pulling invisible strings and his ill-assorted team barely keeping their head above the water level. River Cartwright's grandfather who was once one of the stars of the great game is now old and senile and presents a danger to the new powers-that-be, while on the other side of town a terrorist attack on a shopping center triggers a whole series of new threats. Is there a connection between the two events and how will our motley group of losers come out of it all alive? Or will they? Great stuff. More, please! ~ Maxim Jakubowski

Whoo hoo! The Slough House misfits return, with the fourth of the series, and the horrendously brilliant Jackson Lamb at the warped helm. Former spook David Cartwright may be retired, his grandson and Slough House resident River may be worried about his health, however you wouldn't want to underestimate this old man’s capabilities, oh no… If you've not yet discovered the seriously wicked pen of Mick Herron, do start at the beginning with ‘Slow Horses’, as although this could be read as a standalone, you wont get the best result if you step into the middle of this fabulous series. Mick Herron has created a deviously twisted world, it sticks two fingers up at, well, everyone really, as the team manage to create as many issues as they solve. The intricate layers build slowly in what is actually a fast moving story, so don't get left behind, as you may feel a bit daft when you catch up. There are plenty of smirky laughter blurting moments, as well as wince and whimper inducing ones, along the way. ‘Spook Street’ is a wonderfully crooked, scalding hot, absolute crackerjack of read, and it’s part of a series that just shouldn't be missed. ~ Liz Robinson

Never outlive your ability to survive a fight. Twenty years retired, David Cartwright can still spot when the stoats are on his trail. Radioactive secrets and unfinished business go with the territory on Spook Street: he's always known there would be an accounting. And he's not as defenceless as they might think. Jackson Lamb worked with Cartwright back in the day. He knows better than most that this is no vulnerable old man. 'Nasty old spook with blood on his hands' would be a more accurate description. 'The old bastard' has raised his grandson with a head full of guts and glory. But far from joining the myths and legends of Spook Street, River Cartwright is consigned to Lamb's team of pen-pushing no-hopers at Slough House. So it's Lamb they call to identify the body when Cartwright's panic button raises the alarm at Service HQ. And Lamb who will do whatever he thinks necessary, to protect an agent in peril ...

'Immensely satisfying and utterly brilliant Sarah Hilary Mick Herron is an incredible writer and if you haven't read him yet, you NEED to. I read the Jackson Lamb books one after the other and am already desperate for the next one. They are smart, darkly comic and hugely addictive' Mark Billingham

'A captivating series where the intelligence services misfits and screw-ups become the useful tools of Herron's quite magnificent creation, Jackson Lamb' Christopher Brookmyre

'I love Mick Herron's books more than is decent. Hands down my favourite crime series of the decade ... Spook Street is a superb novel - fast-paced, original, witty and completely satisfying on every level. I just can't get enough of this brilliant series' Antonia Hodgson 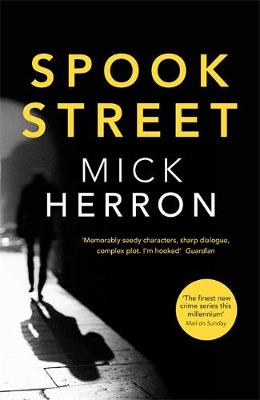