Kill the Next One

LoveReading View on Kill the Next One

Written by a leading Argentinian crime author but set in the USA, around Boston, this psychological thriller is like a serpent eating its tail, weaving a web of questions, thrills, contradicting itself, reinventing itself and doesn't read at all like a translation at all, more like a Harlan Coben or Linwood Barclay novel with an added touch of madness. A man with a terminal tumour is about to kill himself when he is recruited by a mysterious organisation to kill both an evil person and then another poor soul in a similar sitruation as a way of making their deaths less painful to their relatives, and then next be on the list himself. But he soon discovers he is being manipulated and no one is who they pretend to be. A dizzying maelstrom of false identities, deception on every level, psychiatric complications worthy of Hitchcock ensue by the bucket load and will leave the reader dizzy, guessing over and over until the end. A stomach-churning achievement. ~ Maxim Jakubowski

A vivid and striking tale, this cunning book sticks a foot out when you're not expecting it, and as it trips you up, then swaggers off in the opposite direction. Ted McKay is stopped from committing suicide by a stranger, a man who then offers him a ridiculously practical solution to his problems. The first sentence didn't just capture my attention, it battered it. The more I read, the more questions I had, and the more I wanted to know, to understand. Even though it is full of drama, there is a subtle game at play here, Federico Axat sets jarring notes and fractures in the storyline which made me stop, think, doubt. I relished every second and I recommend accepting the premise and immersing yourself completely. Striking a different and unusual pose, ‘Kill The Next One’ is a memorable, riveting, and thrilling read. ~ Liz Robinson

Federico Axat has been touted by more than one critic as a disciple of Stephen King, and an early review described KILL THE NEXT ONE as ‘the perfect thriller’, but when I first read it I immediately thought of the films of Pedro Almodóvar. Reading KILL THE NEXT ONE is like disappearing into a maze—an expedition into male paranoia, into that uncomfortable place halfway between delusion and reality—but it’s also highly entertaining and full of action, with surreal plot twists, and a hook at the end of almost every chapter. Axat manipulates the reader from the first brilliant sentence and keeps you turning pages, never sure what’s about to happen, or if you’re being played. ~ Elizabeth Cowell, Senior Editor, Text Publishing.

Kill the Next One Synopsis

Ted has it all: a beautiful wife, two daughters, a high-paying job. But after he is diagnosed with a terminal brain tumour he finds himself with a gun to his temple, ready to pull the trigger. That’s when the doorbell rings.

A stranger makes him a proposition: kill two deserving men before dying. The first is a criminal, and the second is, like Ted, terminally ill, and wants to die. If Ted kills these men he will then become a target himself in a kind of suicidal daisy chain—and won’t it be easier for his family if he’s a murder victim?

Kill the Next One is an audacious, immersive psychological thriller in which nothing is what it seems.

Kill the Next One Reader Reviews

Kill the Next One Press Reviews

Praise for Federico Axat andKill the Next One:

‘Nightmare imagery, mind-bending plot twists, and a kaleidoscopic storytelling style lend Axat’s tale a vertiginous air, but at the core of this literary fever dream lies an elegantly crafted and emotionally resonant mystery that astonishes, devastates, and satisfies in equal measure.’ Publishers Weekly

‘A psychological thriller where nothing is what it seems…and where pieces are moved as in a game of chess.’ El Mundo 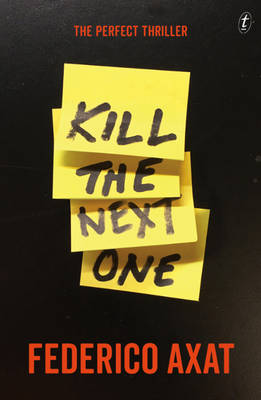 Federico Axat was born in Buenos Aires, Argentina in 1975. His earlier novels have been translated into Italian, German, French, Portugese and Chinese. His third novel,Kill the Next One, was published as La última Salida in Spanish and has become an international sensation with rights sold in 33 territories. Axat’s novels stand out for their high dose of suspense, plot twists and unexpected endings. Kill the Next One is set in the United States, where Axat lived for a time before returning to his native Argentina.

View All Books By Federico Axat