Take a romp through your childhood memories and observe the villains of Wild Wood with new eyes. Mr Toad, Ratty and Mole from 'The Wind in the Willows' are most definitely ‘Haves’ so it’s fascinating to see the story from a different angle, that of the ‘Have Nots’. In this retelling of Kenneth Grahame’s magical story you can almost hear Needle's thought process as he read the original adventures and pondered.. ahhh but, what if! For anyone concerned about a much loved treasure being tarnished, worry not. A delight for adults and children alike, the author successfully ridicules human folly and although Mr Toad is shown up as the selfish, thoughtless, spendaholic that he is, he's actually still as captivating as ever!

Wild Wood is as funny, as relevant and as pleasurable in 2014 as it was on first publication in 1981.

“Wild Wood was one of those single ideas that hit you like a flash of lightning,” writes Jan Needle. “I was in a doss house in Dewsbury, talking about The Wind in the Willows when it occurred to me that Mr Toad and his chums from the River Bank didn’t know that they were born. Mr Toad lived in a glorious mansion from which he bought and abandoned executive toys on the merest whim. The servants who existed to service his desires were not even mentioned. They were invisible, taken for granted. They were just there. As indeed were Mr Rat’s.”

And so a gallant band was formed to bring about the downfall of the rich, uncaring few. They were the Wild Wood volunteers and theirs is a saga of poverty and desperation, loyalty and treachery, strange love and great despair.

Jan Needle's richly comic re-telling of Kenneth Grahame's The Wind in the Willows can be read as political satire but there's much more to enjoy. Though the wood is cold and unemployment bleak it only takes a sea rat with an accordion and a nip of Daisy Ferret's special brew to get the stoats and weasels partying.

Wild Wood was first published in 1981 by Andre Deutsch. In its early years the book was translated into several languages (including Japanese) in editions throughout the world. Rapidly a cult bestseller, it was broadcast on BBC Radio 4 and has been adapted for the stage. The late Paul Foot was among Wild Wood’s admirers describing it at the Cheltenham literary festival as ‘absolutely wonderful, joyful satire’. Further praise came from former deputy Labour party leader Roy Hattersley (Mail on Sunday), academic critic Ann Wright (‘truly comic descriptions of political realities’), and writer Jan Mark (‘I honestly wish I had written this book’). Joanna Carey in The Guardian described it as ‘An ambitious, exuberant and lovingly wrought book with many subtle shifts of interpretation on those complex questions of greed and need, loyalty, luxury and envy.’ 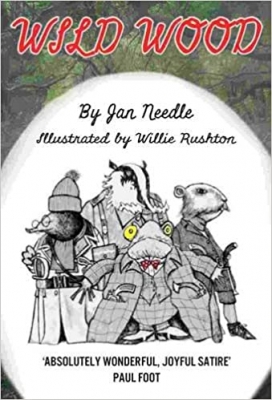 Jan Needle’s first job was as a journalist on the Daily Herald and he was soon writing radio and TV dramas as well as journalism, stage plays and novels. His early novels for children include the anti-racist My Mate Shofiq, which caused controversy on first publication. More recently Jan survived an orchestrated protest over Killing Time at Catterick, his expose of conditions among British Army recruits. Jan’s writing is often unflinchingly realistic but is tempered by a warm humanity and inventive sense of fun.   Click here to read more about Jan's fascinating life.   Author ...

View All Books By Jan Needle