Longlisted for the Guardian First Book Award, and shortlisted for the Desmond Elliott Prize and the Walter Scott Prize for Historical Fiction Love is a bygone idea, centuries-worn. There are things we can go without, and love is among them; bread and a warm hearth are not. In September 1870 a train leaves Manchester bound for London. On board is Lizzie Burns, a poor worker from the Irish slums, who is embarking on the journey that will change her forever. Sitting in the first-class carriage beside her lover, the wealthy mill-owner Frederick Engels, the vision of a life of peace and comfort takes shape before her eyes: finally, at nearly fifty, she is to be the lady of a house and the wife to a man. Perhaps now she can put the difficulties of the past behind her, and be happy? In Gavin McCrea's stunning debut novel, we follow Lizzie as the promise of an easy existence in the capital slips from her view, and as she gains, in its place, a profound understanding of herself and of the world. While Frederick and his friend Karl Marx try to spur revolution among the working classes, Lizzie is compelled to undertake a revolution of another kind: of the heart and the soul. Haunted by her first love, a revolutionary Irishman; burdened by a sense of duty to right past mistakes; and torn between a desire for independence and the pragmatic need to be taken care of, Lizzie learns, as she says, that 'the world doesn't happen how you think it will. The secret is to soften to it, and to take its blows.' Wry, astute and often hilarious, Lizzie is as compelling and charismatic a figure as ever walked the streets of Victorian England, or its novels. In giving her renewed life, Gavin McCrea earns his place in the pantheon of great debut novelists.

Gavin McCrea was born in Dublin in 1978. His first novel, Mrs Engels (Scribe 2015) was shortlisted for the Desmond Elliott Prize and the Walter Scott Prize, and longlisted for the Guardian First Book Award. Gavin's articles have appeared in The Paris Review, The Guardian, The Irish Times, Catapult, and LitHub. 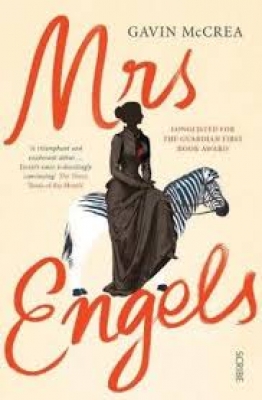 View All Books By Gavin McCrea