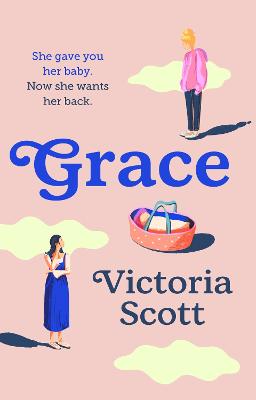 "An emotionally charged story of adoption centred on the two women on either side of the case – whose side should we be on? "

At the heart of this story are two women in two very different circumstances – and one baby Grace in the middle of it all. There’s teenager Michelle, who’s only known a life of squalor and strife, who believes her baby is best off with another family. Enter Amelia, whose position is almost the opposite – having struggled with fertility she and her husband Piers are perfectly placed to give the child a stable home. But Michelle’s desire to have her daughter back throws Grace’s future into jeopardy. What I particularly liked about Grace, Victoria Scott’s second novel, is her choice to give voice to both women; neither of whom are made out to be villains. Instead, we are provided with a more nuanced discussion around motherhood and the complex situation some women can find themselves in. Who should we pity, who is more worthy? It’s a sensitive subject that Scott handles well, without stereotyping. There’s a judgement case in the end – and expect some emotional twists along the way.

The gripping and heartbreaking second novel by the author of BA Book of the Month and LoveReading Debut of the Month Patience.

She gave you her baby. Now she wants her back.

Nineteen-year-old Michelle has had a tough life, to say the least. Then she gets pregnant. She is convinced she would be a terrible mother but having grown up in care, she cannot bring herself to subject her child to the same fate.

Amelia and her husband have dreamed of having a family for years, but have lost all hope after the worst kind of tragedy. Then they are offered the chance to adopt baby Grace, and it feels like they finally have everything they've ever wanted.

But then Michelle decides she wants her daughter back, and it's up to the courts to decide. What is best for Grace - a mother's love, or a stable home? Whatever the ruling, one thing is certain: neither woman's life will ever be the same again...

'Inspired by truth, Patience and her family come alive on the pages. I felt every single emotion with them' Alice Peterson, author of Monday to Friday Man.

'An extraordinary novel about love and hope and family and what happens in the space between the words. I adored it' Kirsten Hesketh, author of Another Us.

'An eye-opening, sincere and beautiful debut. A really special novel that I suspect will have a tangible effect on readers' NB Magazine.

'Absorbing, poignant story of a family's emotional rollercoaster in the aftermath of participating in a risky medical trial' - LoveReading

Victoria Scott has been a journalist for almost two decades, working for a wide variety of outlets including the BBC, Al Jazeera, Time Out, Doha News and the Telegraph. Alongside her love of telling real-life stories, she has also always written fiction, penning plays, stories and poems ever since she first worked out how to use her parents' electric typewriter. When she's not writing, Victoria enjoys running incredibly slowly, singing loudly, baking badly and travelling the world extensively. Victoria is a Faber Academy graduate. She has a degree in English from King's College, London and a Postgraduate Diploma in Broadcast Journalism from City University, London. She lives near London with her husband and two children, and works as a freelance journalist, media trainer and journalism tutor.

More About Victoria Scott
Add To Wishlist
Buy from our bookstore and 25% of the cover price will be given to a school of your choice to buy more books.