Emilie Jansson has just been made partner at a prestigious law firm when she is asked to work with an unusual partner. Teddy is an ex-con trying to stay on the right side of the law while working as the firm's fixer and Special Investigator. Meanwhile, a body is discovered in a remote house in the country after what looks like an attempted robbery - and a severely wounded man found near the scene is soon in the frame for murder. Emilie takes on the role of his defence lawyer. But when the trail of evidence leads back to her partner Teddy's wayward past, Emilie begins to wonder what she's taken on...In Stockholm Delete, Emilie and Teddy become entangled in a complex and dangerous web with deep connections to Stockholm's criminal underworld. Both will be tested in terrible ways. But can they survive long enough to uncover the truth?

At last: an epic European thriller to rival the Stieg Larsson books. It's an entirely new criminal world, beautifully rendered - and a wildly thrilling novel. -- James Ellroy on the Stockholm Noir trilogy

Jens Lapidus, with his dazzling book, Easy Money, is the new Swedish thriller writer everyone's been waiting for. -- Reggie Nadelson

Anything Jens Lapidus writes is a must-read for me. His writing crackles with a profound understanding of not simply why bad people do bad things, but how. -- Ryan Gattis

Jens Lapidus is a very talented crime author. He is also a young author. He is only going to get better - and he has every potential of becoming the best -- Leif GW Persson

[Stockholm Delete] is intense and hyperrealistic, written by a suspense novelist who this time has created a near perfectly matched relationship between the novel's content and the form in which it is presented.  Dagbladet, Norway 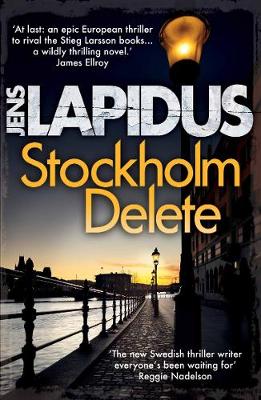