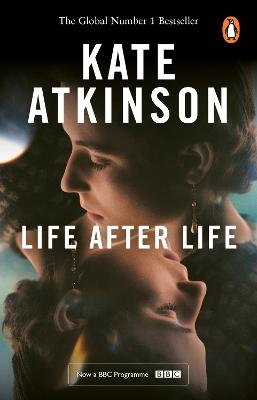 Winner of the Costa Novel Award 2013.

Winner of the Specsavers UK Author of the Year 2013.

With wit and compassion, Kate Atkinson finds warmth even in life's bleakest moments, and shows an extraordinary ability to evoke the past. Here she is at her most profound and inventive, in a novel that celebrates the best and worst of ourselves.

Click below to listen to an extract from the audiobook edition of this title.

Life After Life by Kate Atkinson by Random House Audiobooks

The PRIZE-WINNING BESTSELLER, now a major BBC1 DRAMA SERIES starring Thomasin McKenzie, Sian Clifford and James McArdle, directed by BAFTA award-winning John Crowley. 'Dazzling, witty, moving, joyful, mournful, profound... one of the best novels I've read this century' Gillian Flynn, bestselling author of GONE GIRL 'A box of delights ... it grips the reader's imagination on the first page and never lets go.' HILARY MANTEL, author of THE MIRROR AND THE LIGHT ___________________________________ What if you had the chance to live your life again and again, until you finally got it right? During a snowstorm in England in 1910, a baby is born and dies before she can take her first breath. During a snowstorm in England in 1910, the same baby is born and lives to tell the tale. What if there were second chances? And third chances? In fact an infinite number of chances to live your life? Would you eventually be able to save the world from its own inevitable destiny? And would you even want to? Life After Life follows Ursula Todd as she lives through the turbulent events of the last century again and again. With wit and compassion, Kate Atkinson finds warmth even in life's bleakest moments, and shows an extraordinary ability to evoke the past. Here she is at her most profound and inventive, in a novel that celebrates the best and worst of ourselves. ____________________ 'Merging family saga with a fluid sense of time and an extraordinarily vivid sense of history at its most human level. A dizzying and dazzling tour de force' Daily Mail 'Absolutely brilliant...it reminded me a bit of her first book Behind the Scenes at the Museum, which is one of my most favourite books ever.' Marian Keyes, author of Rachel, Again 'An exceptional writer' Guardian '[A] magnificently tender and humane novel' Observer 'A ferociously clever writer...a big, bold novel that is enthralling, entertaining' New Statesman 'Exceptionally captivating' New York Times 'Truly brilliant...Think of Audrey Niffenegger's The Time Traveler's Wife or David Nicholl's One Day.. a rare book that you want to start again the minute you have finished.' The Times

Kate Atkinson is one of the world's foremost novelists. She won the Costa Book of the Year prize with her first novel, Behind the Scenes at the Museum. Her three critically lauded and prize-winning novels set around the Second World War are Life After Life, an acclaimed 2022 BBC TV series starring Thomasin McKenzie, A God in Ruins (both winners of the Costa Novel Award) and Transcription. Her bestselling literary crime novels featuring former detective Jackson Brodie, Case Histories, One Good Turn, When Will There Be Good News? and Started Early, Took My Dog, became a BBC television series starring Jason Isaacs. Jackson Brodie later returned in the novel Big Sky. Kate Atkinson was awarded an MBE in 2011 and is a Fellow of the Royal Society of Literature.

More About Kate Atkinson
Add To Wishlist
Buy from our bookstore and 25% of the cover price will be given to a school of your choice to buy more books.

The Storms of War

Water for Elephants a Novel