Oh my word, this is quite simply an eye-opening must-read.

Oh my word, this is quite simply an eye-opening must-read. Erwin James is a journalist and author, he is also a trustee of the Prison Reform Trust and patron of a number of offender rehabilitation schemes. He writes about his life, about the years of abuse and neglect and misguided love that led to him committing crime from the age of 11 through to 28 when convicted of two murders. He also writes about his years in prison, of the people who encouraged him to look back, to repent, and to understand his potential to learn how to travel a different path. Erwin James writes with huge compassion and empathy, he is blunt but not graphic, honest but not seeking sympathy. This is a man who understands what he has done, understands the prison system, and truly believes that “rehabilitation is the best way to protect the public”. ‘Redeemable’ is a hugely important book, it made me flinch and wonder at the capacity and capabilities of the human mind, it made me despair, it also made me hope, oh how it made me hope.

Liz visited the Chiddingstone Castle Literary Fesitval where Erwin James gave a talk. To read more about the festival, head over to her Blog Post.

Born in Somerset in 1957 to itinerant Scottish parents, Erwin James lost his mother when he was seven. Shipped from home to home and subject to the whims of various caregivers after his father turned to alcohol and violence, he committed his first crime of breaking and entering when he was ten. His teenage and early adult years were spent drifting, and his petty crime turned increasingly violent, culminating in the terrible events for which he was jailed for life in 1984. Entering prison at 27, James struggled to come to terms with the enormity of his crimes and a future without purpose or hope. Then he met Joan, a prison psychologist, who helped him to confront the painful truth of his past, and to understand how it had shaped him from such a young age. Her sessions transformed his life. Encouraged to read and to educate himself, over the next twenty years Erwin James would go on to receive a BA in History, and become a regular columnist for the Guardian. Speaking to the very heart of the human condition, this is a book that offers no excuses - only the need to understand how we become who we become, and shows that no matter how far a person may fall, redemption is possible with the right kind of help. It is an important and timely memoir. 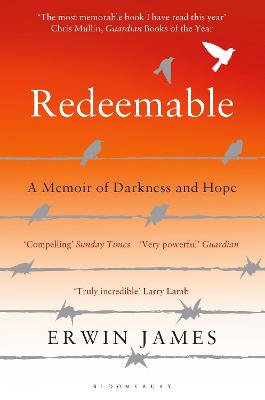 Erwin James is a Guardian columnist and author. He has published two collections of essays: A Life Inside: A Prisoner's Notebook and The Home Stretch: From Prison to Parole. A trustee of the Prison Reform Trust, he has given keynote addresses to the Royal Society in Edinburgh, the Probation Union at the Danish parliament and the Festival of Dangerous Ideas at the Sydney Opera House. He is a Fellow of the Royal Society for the Encouragement of the Arts and an Honorary Master of the Open University, and is patron of a number of offender rehabilitation charities.