THE INTELLIGENT NEW POST-APOCALYPTIC THRILLER ABOUT A WOMAN FIGHTING TO SAVE HER SON 'A smartly written thriller that opens with a satisfying bang . . . splendid' STEPHEN KING 'Powerful and intelligent' GUARDIAN 'A major, major talent' GEORGE R.R. MARTIN _______ A WORLD OF WOMEN A MOTHER AND SON ON THE RUN Three years after a virus wiped out most men on earth, Cole's son, Miles, is one of the rare survivors. Yet in this changed world, there are women who would kill to get their hands on that most prized commodity - a living boy. Getting Miles to safety means crossing America with deadly pursuers hot on their heels - including Cole's own sister, Billie. But if there are some who will commit any crime to possess Miles, Cole must face some terrible choices to protect her son . . . _______ The powerful and intelligent new thriller from the author of Richard and Judy bestseller The Shining Girls and the prize-winning Zoo City Included in 'Best Books of Summer 2020' in Elle, Entertainment Weekly, Publisher's Weekly and Oprah Magazine _______ 'Bowstring-taut, visceral, and incredibly timely: Beukes's plague-tale is a parable about the glory and terror of Americanism in times of calamity' Cory Doctorow 'A fast-moving thriller [that] splices gut-punching action sequences and feminist gender politics with an impressively light touch. Bubbles with big ideas. This intelligent speculative novel about a pandemic feels alarmingly close to home' Metro 'Afterland is that rare creature, a ripping tale that neither shies away from big questions nor interesting answers' New Scientist 'Lauren Beukes is a writer with a startling imagination, and a masterful ability to rewrite the rules of whatever genre she turns to' Ben Winters, author of Underground Airlines and Golden State 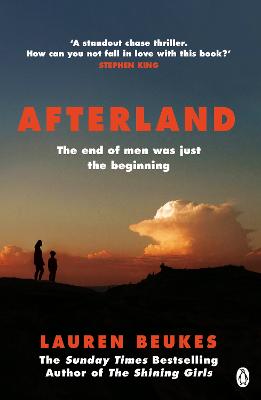 Lauren Beukes is the award-winning and internationally best-selling South African author of The Shining Girls, Zoo City, Moxyland and Broken Monsters, among other works. Her novels have been published in twenty-four countries and are being adapted for film and TV. She's also a screenwriter, comics writer, journalist and award-winning documentary maker. She lives in Cape Town, South Africa with her daughter and two troublesome cats.