Votan and Other Novels

Part of the Fantasy Masterworks Series

Votan and Other Novels Synopsis

In the second century AD, a Greek nobleman is travelling and living abroad in Germany while carrying on an affair with a military man's wife. When discovered, he takes an emergency business trip to save his life and packs amongst his belongings certain items that lead the people he encounters to think him a Norse God, a fortuitous point of view which he does little to dispel. Forced to keep up the pretence of being a god while staying one step ahead of his lover's jealous husband, Photinus must juggle the severity of his situation with the enjoyment of being a god. Published here with its sequel, NOT FOR ALL THE GOLD IN IRELAND and companion volume MEN WENT TO CATTREATH, VOTAN is one of the highpoints of modern fantasy. 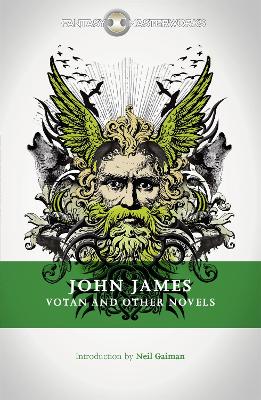 John James studied philosophy at St David's University College, Lampeter, and also read and completed an MA in psychology at Selwyn College, Cambridge. He became a psychologist for the Ministry of Defence, lecturing on the selection and training of air crews for the RAF at Brampton. In addition to writing he also worked as a teacher and later for the Scientific Civil Service working on aviation problems. He is known for writing four historical novels set in Roman and early medieval Britain and Europe. He is buried in the graveyard at Strata Florida Abbey in Wales.

View All Books By John James