Your House Will Pay

Your House Will Pay Synopsis

Two families. One desperate to remember, the other to forget. Winner of the LA Times Book Prize, Best Mystery/Thriller Winner of the California Book Awards' Gold Medal for Fiction Shortlisted for the John Creasey (New Blood) Dagger Shortlisted for the Macavity Awards, Best Mystery Novel Shortlisted for the Anthony Awards, Best Novel Finalist for the NYPL Young Lions Fiction Award 'Masterful.' Ruth Ware 'A searing examination of racial and family politics that is also an immaculately constructed whodunit.' Daily Telegraph, Summer Reads 'Writing a page-turner about racial politics in the U.S. is a delicate enterprise fraught with pitfalls, but Cha manages it superbly in this thought-provoking family saga.' Daily Mail, Summer Reads Grace Park and Shawn Mathews share a city, but seemingly little else. Coming from different generations and very different communities, their paths wouldn't normally cross at all. As Grace battles confusion over her elder sister's estrangement from their Korean-immigrant parents, Shawn tries to help his cousin Ray readjust to life on the outside after years spent in prison. But something in their past links these two families. As the city around them threatens to spark into violence, echoing events from their past, the lives of Grace and Shawn are set to collide in ways which will change them all forever. Beautifully written, and marked by its aching humanity as much as its growing sense of dread, Your House Will Pay is a powerful and moving family story, perfect for readers of Celeste Ng's Little Fires Everywhere and Paul Beatty's The Sellout. What readers are saying: 'Simultaneously thrilling and thoughtful... a terrific, fast-moving story of two characters trying to live with the truth.' 'A must-read.' 'This novel is wonderful... it will stick with you.' 'Sensitive and astute, it's a book we need right now, and it's a book that lingers, offering plenty to think about.' 'A smart, powerful, fully-engaged book that never once blinks or backs down or takes an easy out, and then nails one of the best endings I've ever read.'

Steph Cha is the author of Your House Will Pay and the Juniper Song crime trilogy. She's an editor and critic whose work has appeared in the Los Angeles Times, USA Today and the Los Angeles Review of Books. Her 2020 novel Your House Will Pay was shortlisted for the CWA John Creasey (New Blood) Dagger award and the Macavity Award for Best Mystery Novel and won the LA Times Book Prize and the California Book Award for Fiction. A native of the San Fernando Valley, she lives in Los Angeles with her husband and two basset hounds. 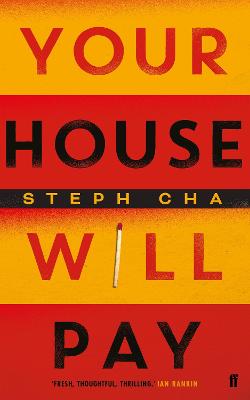