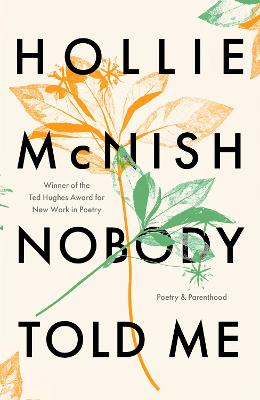 Nobody Told Me Synopsis

'This book should be required reading for anyone thinking of having a baby, or even anyone who knows someone who is thinking of having a baby' Scotland on Sunday 'Fascinating and honest' Mumsnet 'Like talking to a friend' Observer Winner of the Ted Hughes Award for New Work in Poetry There were many things that Hollie McNish didn't know before she was pregnant. How her family and friends would react; that Mr Whippy would be off the menu; how quickly ice can melt on a stomach. These were on top of the many other things she didn't know about babies: how to stand while holding one; how to do a poetry gig with your baby as a member of the audience; how drum'n'bass can make a great lullaby. And that's before you even start on toddlers. But Hollie learned. And she's still learning, slowly. Nobody Told Me is a collection of poems and stories; Hollie's thoughts on raising a child in modern Britain, of trying to become a parent in modern Britain, of sex, commercialism, feeding, gender and of finding secret places to scream once in a while.

Hollie McNish is an award-winning poet based between Cambridge and Glasgow. She won the Ted Hughes Award for Nobody Told Me and has published three other collections - Plum, Cherry Pie and Papers.

More About Hollie McNish
Add To Wishlist
Buy from our bookstore and 25% of the cover price will be given to a school of your choice to buy more books.