Part of the Henry Pratt Series

When pretty young TV researcher Nicky Proctor visits Cafe Henry in London's Soho, Henry Pratt's life changes forever. He becomes an instant star of the TV food quiz, A Question of Salt and before long he is given his own series, Hooray, it's Henry. The book of the series reaches Number Two. He's a celebrity. Henry Ezra Pratt has come a long way from his humble beginnings. But, as usual in Henry's life, things begin to go wrong. He incurs the deep hatred of rival celebrity chef Bradley Tompkins, with his bad manners, bad wig and no Michelin stars. A war is waged against him, escalating into plots and deceptions which threaten to destroy the reputation and career of the man dubbed 'The People's Chef'. It must be Bradley behind all this - or must it? On the domestic front, too, there are storms ahead. Henry is blissfully happy in his second marriage to Hilary, but he is sorely tempted by young Nicky and his lovely co-star Sally. Can he resist? Can he become a real man at last? Or will success spoil Henry Pratt for good...? We last met Henry Pratt in The Cucumber Man. Pratt a Manger continues the hilarious story of a great British underdog. 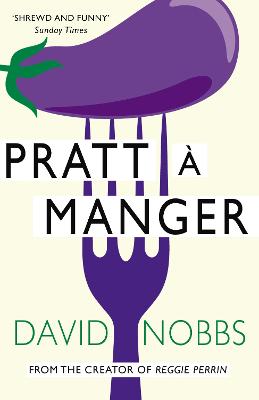