Growing up as the only child of strict, God-fearing parents, Lucilla has always felt her difference. But it is not till adulthood that she discovers the real reasons behind her adopted mother's oft times violent indifference. As for Harriet, she would have readily sent her longed for baby back if she could, having discovered she falls all too short of her expectations. And then there is Bethan, a young girl in 1940s Wales, whose only mistake is falling in love with the wrong man...

'Heartwarming tale of motherhood and identity...[one of] this year's coolest must-reads' Stylist

Anne Berry was born in London in 1956, then spent much of her infancy in Aden, before moving on to Hong Kong at the age of six, where she was educated, first at Little Peak School, then Big Peak School, finally at the Island School, where she completed her A levels. She worked for a short period as a journalist for the South China Morning Post, before returning to Britain. After completing a three-year acting course at the Guildford School of Acting, and attaining LAMDA diplomas with honours in acting, teaching and speech therapy, she embarked on a career in theatre. She played pantomime to Shakespeare, and everything in between, shuttling around regional theatres. Most memorable were seasons spent at Theatre Clwyd Wales, Theatre Royal Windsor and Regents Park Open Air Theatre.

Waylaid by love and marriage, Anne and her husband settled in Surrey with their four children. In 1992 they moved to their present home in the village of Bookham. Here Anne founded a small drama school, running it for over ten years. Throughout this period she wrote over thirty plays, performed by the pupils of the school.

Anne's first love is writing, and it is now her full-time occupation. She remembers loving nothing so well as being given an imaginative composition for English homework at Peak School in Hong Kong. Coming a close second is theatre, with an unbridled passion for Shakespeare. She is an art lover, with Vermeer and Caravaggio being particular favourites. Anne is also a keen swimmer and walker. She has had undiminished support from her family in her writing career.

More About Anne Berry
Add To Wishlist
Buy from our bookstore and 25% of the cover price will be given to a school of your choice to buy more books.

The Girl You Left Behind 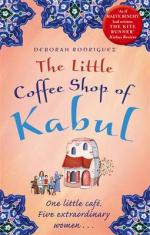 The Little Coffee Shop of Kabul

A Wedding in December

It Happened One Summer