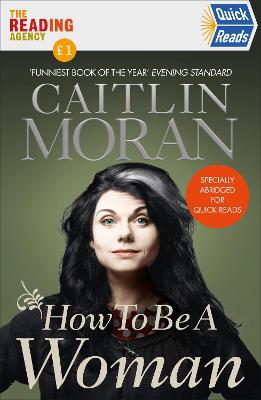 How to be a Woman

March 2014 Guest Editor Jojo Moyes on How to be a Woman.

It's a tricky job, bringing up teenagers. And when my daughter hit 14 I gave her Moran's bestselling book, which addresses many of the issues young women face, but does so with humour and warmth, and without making men the enemy. She read it, had her mind blown, and promptly wrote Caitlin a four page fan letter. I wish all girls would read it.

Featured on The Book Show on Sky Arts at the Hay Festival on 4 June 2012.

Winner of the Galaxy Book of the Year Award 2011.

There's never been a better time to be a woman: we have the vote and the Pill, and we haven't been burnt as witches since 1727. However, a few nagging questions do remain... Why are we supposed to get Brazilians? Should you get Botox? And do men secretly hate us? This title answers these questions and more.

Upon winning the Galaxy Book of the Year award, Caitlin Moran said: “Obviously Rear Of The Year is the one I’ve always been gunning for, but since I found out it’s judged on “form” rather than “sheer volume”, then Book of the Year is not only a total honour and thrill, but also enables me to chow down on a hogroast over Christmas without worrying about fitting into my jeggings.”

How to be a Woman Synopsis

It's a good time to be a woman: we have the vote and the Pill, and we haven't been burnt as witches since 1727. However, a few nagging questions do remain...Why are we supposed to get Brazilians? Should we use Botox? Do men secretly hate us? And why does everyone ask you when you're going to have a baby? Part memoir, part rant, Caitlin answers the questions that every modern woman is asking.

Caitlin Moran had literally no friends in 1990, and so had plenty of time to write her first novel, The Chronicles of Narmo, at the age of fifteen. At sixteen she joined music weekly, Melody Maker, and at eighteen briefly presented the pop show 'Naked City' on Channel 4. Following this precocious start she then put in eighteen solid years as a columnist on The Times - both as a TV critic and also in the most-read part of the paper, the satirical celebrity column 'Celebrity Watch' - winning the British Press Awards' Columnist of The Year award in 2010 and Critic and Interviewer of the Year in 2011. The eldest of eight children, home-educated in a council house in Wolverhampton, Caitlin read lots of books about feminism - mainly in an attempt to be able to prove to her brother, Eddie, that she was scientifically better than him. Caitlin isn't really her name. She was christened 'Catherine'. But she saw 'Caitlin' in a Jilly Cooper novel when she was 13 and thought it looked exciting. That's why she pronounces it incorrectly: 'Catlin'. It causes trouble for everyone.

More About Caitlin Moran
Add To Wishlist
Buy from our bookstore and 25% of the cover price will be given to a school of your choice to buy more books.

Always Look on the Bright Side of Life A Sortabiography