June 2011 Guest Editor Suzannah Dunn on Swimmer...
This is much more ‘me’, and not just because I’m a (daily) swimmer!  A suitable choice, too, perhaps, for this Olympic summer… but, er, perhaps not, because this is not - to say the least - an edifying tale…  It’s the story of a competitive swimmer:  her rise and fall.  The shape of the novella is one of its impressive qualities but, within that fluid  (no pun intended) structure there’s not a word out of place.  I hesitate to call this a ‘literary’ or ‘lyrical’ piece, not because it isn’t, but because I might be (mis)understood to be implying that it’s wordy.  On the contrary, it’s crystal clear.  And what a story it tells.  This novella really is one for a single, spellbound sitting.  Addressed to the swimmer herself – ‘you’ – there’s something of a love letter to it, whilst the narration manages at the same time to be benignly detached, all-seeing, the observations forensic.  What a balancing act!  Quite simply breathtaking.

She swims into the medals and then into oblivion -- a sensuous, searing, compact debut from an outstanding new British writer. This is a striking, supple and direct debut from a new English writer that both promises an exceptionally exciting future and provides an unusual, accomplished and saleable debut. It's a character piece, charting the life of a girl who becomes besotted with butterflies and swimming on the same holiday when an infant, then grows up to become a world-class swimmer before, at 19, obsolescence overtakes her with disorienting haste! If taken on its own terms -- as an intense and focused portrait -- it is simply staggering; a miniature, but a perfect one.

It is stuffed with gorgeously apt and fresh imagery and has tremendous verve about it. It reads, in fact, like a race, as it should. 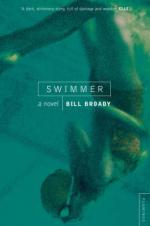 Formerly a croupier, a care worker and a cartographer, Bill Broady was lodging in the attic of Bradford poet and poetry publisher David Tipton when a Littlewoods windfall allowed him to finish his first book. 'Originally Swimmer started out as three poems. One day I was walking on Hampstead Heath with a terrible hangover and realised it was one project.' An intense, stunningly original and lyrical novel, Swimmer was published to high acclaim by Flamingo last January.Bill Broady has been writing for years. 'I had a mass of stuff – four novels and a massive prose poem…...

View All Books By Bill Broady