An  edge-of-your-seat paranormal romance for girls who want more than just a romance.  When Sky and Zed meet something lights up between them that tells them they’re meant for each other.  But when Sky is kidnapped their relationship is put to the ultimate test and it’s Sky who must fight the demons of her past if she’s ever to see her family and her soul mate ever again. This is not just paranormal romance, it definitely has a really big kick in the form of suspense and high drama that stands it out above the paranormal romance many of us like to read.

When Sky catches a glimpse of Zed for the first time, lounging against his motorbike at school, she is drawn to him just like every other girl in Wickenridge. But Zed sees something special in her that the other girls don't have. Zed tells her they are both Savants - people with special powers like telepathy and the ability to see into the future. Not only that, she is a Savant too, and his soulfinder - meant to be together. When a soulfinder speaks telepathically to her partner, it's like all the lights coming on in a building. You lit me up like Vegas. But for Sky it's just not that easy - she's a mystery to herself, haunted by nightmares from her past before she was adopted, and riddled with doubt and insecurity. Just when Sky is slowly coming round to the idea of being with Zed she is kidnapped by a family of criminal Savants. In a chilling twist, Sky and Zed's relationship is put to the ultimate test and the fate of those she loves lie in Sky's hands. Will Sky have the strength to embrace her power and be brave enough to control her own destiny, or will the dark demons of her past prevent her from realising her true potential? 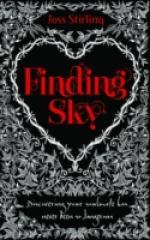 Joss Stirling studied English at Cambridge and has always been fascinated by the idea that lifeis more than what we see on the surface. Researching Finding Sky saw her travelling in the characters' footsteps, from the awe-inspiring landscape of the Rockies, down a white-water river on a raft, and to the artificial skyline of Las Vegas.

View All Books By Joss Stirling