Everyone loves a bad boy, and Anthony Bourdain does bad better than anyone, with his no-holds-barred behind the scenes expose of the restaurant world.  He is unashamedly outrageous – and all the more attractive for it.  If I could make any of my heroes have a tenth of his magnetism …

After twenty-five years of 'sex, drugs, bad behaviour and haute cuisine', chef and novelist Anthony Bourdain has decided to tell all. From his first oyster in the Gironde to his lowly position as a dishwasher in a honky-tonk fish restaurant in Provincetown; from the kitchen of the Rainbow Room atop the Rockefeller Center to drug dealers in the East Village, from Tokyo to Paris and back to New York again, Bourdain's tales of the kitchen are as passionate as they are unpredictable, as shocking as they are funny.

'A compelling book with its intriguing mix of clever writing and kitchen patois ... more horrifically gripping than a Stephen King novel'
Sunday Times

'Fantastic: as lip-smackingly seductive as a bowl of fat chips and pungent aioli'
Daily Telegraph

'Extraordinary ... written with a clarity and a clear-eyed wit to put the professional food-writing fraternity to shame'
Observer

Anthony Bourdain’s books include the mega-bestseller Kitchen Confidential, A Cook's Tour and Anthony Bourdain's Les Halles Cookbook. His work has appeared in the New York Times and The New Yorker, and he is a contributing authority for Food Arts magazine. He is also the host of the Emmy Award-winning television show No Reservations. 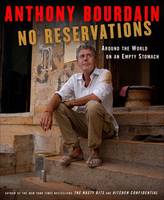 View All Books By Anthony Bourdain