LoveReading View on The Godfather

One of Simon Kernick's favourite books.

The ultimate gangster book and yet this is not just a story of the mafia in the 1940’s but also a story about family. Don Corleone, The Godfather, is a powerful, dangerous and devoted man. He is likeable despite the dark dealings he is involved with and this is what makes for such a great character. Quite simply a brilliant book.

A sense of family is always important to me in my books, and you don’t get a bigger sense of family than with the Corleones.  Puzo does three dimensional characters and moral dilemmas better than anyone, and there are so many iconic moments – horse’s heads, sleeping with the fishes …

Tyrant, blackmailer, racketeer, murderer - his influence reaches every level of American society. Meet Don Corleone, a friendly man, a just man, a reasonable man. The deadliest lord of the Cosa Nostra. The Godfather. A modern masterpiece, The Godfather is a searing portrayal of the 1940s criminal underworld. It is also the intimate story of the Corleone family, at once drawn together and ripped apart by its unique position at the core of the American Mafia. Still shocking forty years after it was first published, this compelling tale of blackmail, murder and family values is a true classic.

Author of numerous bestsellers, the classic chronicler of the American Mafia, and scriptwriter of the Superman movies, Mario Puzo died in 1999. 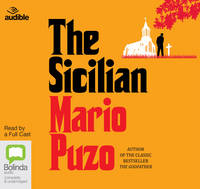 View All Books By Mario Puzo