LoveReading View on The Forgotten Man

Robert Crais is not just a novelist; heâ€™s also written for TV for the likes of LA Law and Hill Street Blues.  LAPD enlists the help of private investigator Elvis Cole, when an unidentified corpse turns up whose background and clues at the scene uncover a troubling picture about the man who may have been Elvis's father. As Elvis and his long-term partner Joe, approach the true identity of the dead man, they unwittingly walk straight into a hornet's nest with catastrophic consequences.

The much-anticipated, fantastic new Elvis Cole novel from the bestselling author of THE LAST DETECTIVE.

Six months after nearly losing everything to the men who kidnapped his girlfriend's ten-year-old son, Elvis Cole is slowly coming back to life - when he receives an ominous phone call from the LAPD. An unidentified body has been found in a seedy Los Angeles alley and Elvis is called to the scene. When he arrives to view the body, cops scrutinize his reaction, telling him the only thing found in the room was a packet of newspaper articles all having to do with the past exploits of Elvis Cole. Finally, Elvis is told that before the man died, he said he was Elvis's father. Cole turns to the one person who can help him navigate the minefield of his past - his longtime partner, Joe Pike. As the two men launch an investigation into the dead man's background, Elvis struggles with wanting to believe he's found his father at last - and allowing his suspicions to hold him back. And what he and Pike find is not reassuring. With each clue they uncover, a troubling picture emerges about the man who may have been Elvis's father. As Elvis and Joe approach the true identity of the dead man, they unwittingly walk straight into a hornet's nest.

Gathering all the elements that have made Robert Crais one of the very best crime writers today, THE FORGOTTEN MAN is a spectacular tour de force of suspense and intrigue. It picks up where THE LAST DETECTIVE left off, yet stands alone as a masterful achievement, destined to become an instant classic. 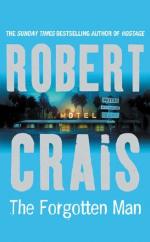