LoveReading View on Byron in Love

This is a wonderfully vivid account of the paradoxical life and loves of Lord Byron. It focuses on the women in his life and in particular the notorious ménage à trois between him, his wife and his half-sister.

Bryon's name is part of the English language. The word 'Byronic' suggests excess, diabolical deeds and a rebelliousness answering neither to king nor commoner. Byron, more than any other poet, has come to personify the poet as rebel, imaginative and lawless, reaching beyond race, creed or frontier, his gigantic flaws redeemed by a magnetism and ultimately a heroism that by ending in tragedy raised it and him from the particular to the universal.

Lord George Gordon Byron was 5' 8" in height, had a malformed right foot, chestnut hair, a haunting pallor, grey eyes fringed with dark lashes and an enchantedness that neither men nor women could resist. Everything about him was a paradox - insider and outsider, beautiful and deformed, serious and facetious, profligate but on occasion miserly, and possessed of a fierce intelligence trapped forever in a child's magic and malices. He was also a great poet, but as he reminded us, poetry is a distinct faculty and has little to do with the individual life of its creator.

Edna O'Brien's vivid biography is beautifully spare, exemplary in its concision, and focuses upon the diverse and colourful women in Byron's life. Its narrative core is the triangular relationship between him, his wife and his half-sister that brought him his timeless notoriety.

"Few writers are better suited than she is to take his measure, and to plumb his heart" Judith Thurman

"Edna O'Brien and Byron are surely the perfect match.. the novelist has made a portrait of the poet that is admiring, gently ironic, funny and perceptive" John Banville

"Edna O'Brien has always been attracted to writers writing about other writers. And in Byron in Love she has a go herself" Caroline Jowett, DAILY EXPRESS 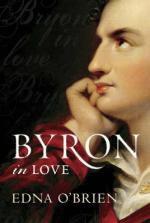