LoveReading View on Scream For Me

A gripping, intricate tale, unputdownable with a totally unexpected ending which did leave some questions, the answers to which I am still not certain of, but it’s a great experience. Murder, revenge, rape, secrets, all that sort of stuff, in fact many threads abound throughout this fast-read of terrible goings on in small-town America. It follows on from Die For Me, another must read.

Scream For Me Synopsis

The terrifying sequel to Karen Rose's brilliant DIE FOR ME. Daniel Vartanian is trying to come to terms with a chilling discovery. Photographs taken, and kept hidden, by his brother years ago, show a group of unidentifiable teenage boys raping young girls for fun.

With his brother now dead, Vartanian is determined to find the girls and bring the rapists to justice. Alex Fallon is unable to forget her past. Her family fell apart when her sister was murdered and now with her step-sister Bailey's disappearance, history seems to be repeating itself.

When Vartanian meets Alex, it's as if a ghost has walked into the room. The double of one of the girls in the photographs, it is only when he learns that she had a twin sister that it begins to make horrifying sense. With Bailey's life in the balance and events escalating out of all control, Daniel and Alex will have to confront their pasts head-on if they are find the missing woman before it's too late. 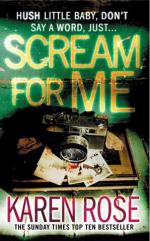 Karen Rose was introduced to suspense and horror at the tender age of eight when she accidentally read Poe's The Pit and The Pendulum and was afraid to go to sleep for years. She now enjoys writing books that make other people afraid to go to sleep. Karen lives in Florida with her family. When she's not writing, she enjoys travelling, karate and, though not a popular Florida pastime, skiing.

View All Books By Karen Rose