LoveReading View on The Magician's Apprentice

A strong new voice in the world of fantasy fiction Trudi Canavan has had massive success with her Black Magician trilogy in the US, Australia and the UK and looks to be going from strength to strength with The Magician’s Apprentice. Sorcery, excitement and danger throughout, a must for all fantasy fans.

In the remote village of Mandryn, Tessia serves as assistant to her father, the village Healer - much to the frustration of her mother, who would rather she found a husband. But her life is about to take a very unexpected turn.

When treating a patient at the residence of the local magician, Lord Dakon, Tessia is forced to fight off the advances of a visiting Sachakan mage - and instinctively uses magic. She now finds herself facing an entirely different future as Lord Dakon's apprentice.

But along with the excitement and privilege, Tessia is about to discover that her magical gifts bring with them a great deal of responsibility. Events are brewing that will lead nations into war, rival magicians into conflict, and spark an act of sorcery so brutal that its effects will be felt for centuries . . .

'A wonderfully and meticulously detailed world, and an edge-of-the-seat plot, this book is a must for lovers of good fantasy' Jennifer Fallon

‘Containing everything you want from a fantasy tale’ DeathRay

‘High calibre fantasy from one of Australia's best’ SFRevu 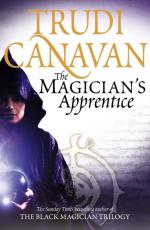