Grace Vandenburg is an attractive, intelligent, witty young woman who also suffers from OCD that makes her count everything in her world. When Seamus Joseph O'Reilly comes in to her world she finds that sometimes the counting doesn't seem to matter so much and when it does Joseph seems to understand. This is a lovely story about just being who you are and being accepted for who you are. Grace is a wonderful character, full of quirkiness, wit and charm who is great just the way she is even if others want to "cure" her. A romantic comedy tackling the issue of OCD in a sensitive and engaging way. Thoroughly enjoyable.

Grace Lisa Vandenburg is in love with numbers. She can tell you the number of letters in her name (19), bristles in her toothbrush (1768) and her brother-in-law's height in centimetres (167).

Her obsession with counting has scuppered any chance of holding down a job or relationship and her life is organised according to a strict routine - she wakes up at the same time every day, flosses her teeth the same number of times each morning, takes the same number of steps to the same café, where she sits at the same table and orders a hot chocolate with two marshmallows and a slice of orange cake.

One day, her world is turned upside down. She arrives at the café to find all the tables full. Panic. Then a stranger - Seamus Joseph O'Reilly -invites her to sit with him and their mutual attraction is instant. Buoyed by the possibility of a lasting romance and encouraged by Seamus, Grace sets out to overcome her OCD.

ADDITION is a witty and moving novel about one woman's attempt to find space in her regimented life for that most chaotic of occupations - love. Grace is unforgettable heroine; frank, funny and flirtatious. She is damaged but never a victim. A classy romantic comedy, the book also questions how mental health problems affect sufferers and those closest to them, and asks, 'what's so great about being normal anyway?

'Toni Jordan has created such a real character in Grace that you are cheering her on, willing her to get to the top of the staircase, intact and unharmed... Her debut novel is juicy and funny, just like its protagonist... this is a gem.' Sydney Morning Herald

Toni Jordan was born in Brisbane in 1966 and graduated from the University of Queensland with a Bachelor of Science. She has worked as a sales assistant, molecular biologist, quality control chemist and marketing manager. Following an early mid-life crisis, Toni left her job in the vitamin industry and enrolled in a writing and editing course with the idea of starting her own writing business. In 2006 she won a Varuna Awards master class to develop her debut novel. Toni lives in Melbourne where she works as a freelance copywriter. 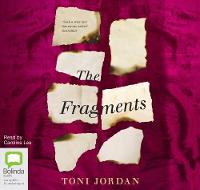 View All Books By Toni Jordan