LoveReading View on The Reincarnationist

A complete change from the last novel from this author,The Venus Fix. This book is almost like a gothic horror with itâ€™s themes of murder, greed, religion and love. The idea of reincarnation is dealt with in a very convincing way, the author has a blog site all about this theme having researched extensively. Fast paced, thought provoking and thoroughly enjoyable. The author also has a website about The Reincarnationist  which you can visit by clicking here.

Rome, 2007: Witness to a suicide bombing, Josh Rider walks away uninjured, but with a terrible gift: flashbacks to a past he doesnâ€™t recognise, in centuries heâ€™s never lived. When an ancient tomb is uncovered, a priceless relic is stolen. Sensing a connection between his strange memories and the stolen artefact, Rider sets out to recover it.

Rome, 4th Century AD: Julius races to the Temple which is engulfed in flames. He rescues the High Priestess Sabina, one of the last Vestal Virgins, who is as wilful as she is beautiful. So begins a love affair that will span the centuries. Sabina and Julius have vowed to protect a treasure that holds the secret of the afterlife.

But there are those who will stop at nothing to have it revealed. If they succeed, it will alter the course of human historyâ€¦ 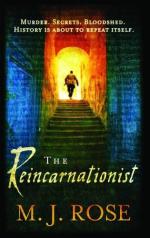 M.J. Rose is the international bestselling author of The Halo Effect, The Delilah Complex, The Venus Fix  and The Reincarnationist.   She self-published her first novel Lip Service  in 1998 after several traditional publishers turned it down. She set up a web site where readers could download her book and began to seriously market the novel on the Internet. It became the first e-book to go on to be published by a mainstream New York publishing house.   Rose has been profiled in Time magazine, Forbes, The New York Times, Business 2.0, Working Woman, Newsweek and New York Magazine. &...