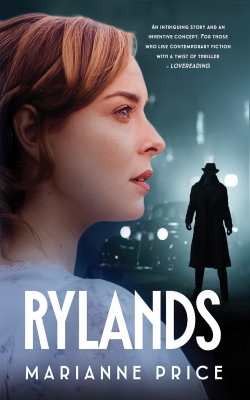 "When Helen travels from Italy to England to visit a long lost friend, a run of the mill getaway and reunion gets an uncanny vintage twist."

Available in paperback on Amazon.

When Helen moved away from Suffolk, she lost touch with Claire. Many years later, now a widow and living in Verona, Helen receives a phone-call out of the blue that grants an opportunity to reconnect with her old friend, and revisit her old hometown. However on arriving Claire reveals she’s joined a small “past-lifestyle” community, living on an old air base as though it were the 1940s. Confused and intrigued, Helen is keen to learn more about the lifestyle here, and delve into her bad feelings about the project leader, Strachan.

There's a lot of plotline to pack into the book, but the author does so without making the story feel rushed at any point. The once close bond between Helen and Claire is replaced, now that their lifestyles and beliefs aren’t as closely aligned, the forthright women clash. I liked the way the characters are portrayed, the awkwardness in Helen and Claire’s adjustment to each other, a shadow of the closeness portrayed early in the book. Helen’s investigations into Rylands’ leader Strachan reveals his systematic abuse of the young women and teenagers on the base. Helen’s earnest pleas and well-intentioned private investigations into such a complex and delicate subject are all well-meant, and the community’s reaction to Helen holds a stark and sinister echo of cult-like behaviour, and a dark reminder of how those with power are able to abuse it. I liked the development of Helen’s relationship with Joe, a storyline that offers light relief amongst the darker themes.

‘Rylands’ by Marianne Price is an intriguing story and an inventive concept. For those who like contemporary fiction with a twist of thriller, this is an easy and quick read.

Available in paperback on Amazon.

An old friendship is rekindled after artist and widow Helen Mason receives an unexpected phone call. Subsequently she leaves her home in Northern Italy for a holiday staying with her one-time close friend Claire, in Suffolk, where they first met many years before. On arrival, Helen is astounded to find Claire living in the first past-lifestyle development in the UK called Rylands, built on a former American Air Base where everything is a total recreation of the 1940s, and to which she has to adhere to including dress and rules. But Helen discovers Rylands has a dark, sordid underbelly revolving around its founder, a man who goes by the name of Strachan, a cold, controlling psychopath, adored by most but not all of the community, with whom she is drawn into a psychological battle.

Marianne Price has been a singer and actress for more than fifty years and has worked in cabaret, television, West End musical theatre, tours, repertory theatre, radio and film.  She is also a highly sort after public and after dinner speaker.

Marianne comes from Tottenham, North London where at the age of fifteen she started out singing in the working men’s clubs and pubs in the area and also in the East End.  She went on to perform leading roles in various musicals as a member of Joan Littlewood’s Theatre Workshop at the Theatre Royal Stratford East and as a solo singer in the theatre’s Sunday Cabaret nights.  She also was a performer in a Royal Variety Performance at the London Palladium.  In musical theatre in the West End Marianne played roles in many well-known shows, including “The Rocky Horror Show”, “Evita” and “Little Me”.   Notably are playing —Sheila in “Hair” at the Shaftesbury Theatre, “Jeannie in the revival of “Hair” at Her Majesty’s Theatre, taking over the role of Rita from Elaine Paige in “Billy” opposite Michael Crawford at the Theatre Royal Drury Lane and performing the role of Sandy in the original London production of “Grease” at the New London Theatre opposite Richard Gere.

Over twenty-five years ago when living in an old house overlooking the sea in Suffolk, she started writing short stories and also poetry.  She has won poetry competitions and her work has also been published.

Marianne now lives in Southport on the coast in the North West of England with her husband where she recently performed the role of Norma Desmond in “Sunset Boulevard” at the Little Theatre.

More About Marianne Price
Add To Wishlist
Buy from our bookstore and 25% of the cover price will be given to a school of your choice to buy more books.