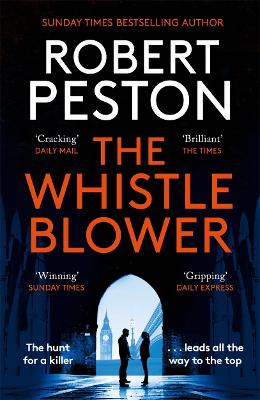 The gripping debut thriller from the UK's top political journalist.

1997. A desperate government clings to power; a hungry opposition will do anything to win. And journalist Gil Peck watches from the sidelines, a respected commentator on the sport of power politics. He thinks he knows how things work. He thinks he knows the rules.

But when Gil's estranged sister, Clare, dies in a hit-and-run, he begins to believe it was no accident. Clare knew some of the most sensitive secrets in government. One of them might have got her killed.

As election day approaches, Gil follows the story into the dark web of interests that link politics, finance and the media. And the deeper he goes, the more he realises how wrong he has been.

Power isn't sport: it's war. And if Gil doesn't stop digging, he might be the next casualty.

Robert Peston is the BBC's award-winning Business Editor, who on September 17 2008, exclusively revealed that the UK's battered mortgage giant, HBOS, was being taken over and rescued by Lloyds TSB. In 2007, Peston’s scoop on Northern Rock seeking emergency financial help from the Bank of England won the Royal Television Society’s Television Journalism Award for Scoop of the Year and the Wincott Award for Business News/Current Affairs Programme of the Year. He was Journalist of the Year in the Business Journalism of the Year Awards for 2007/8, and also won in the Scoop category. He was previously the Sunday Telegraph’s City Editor, in charge of its Business and Money Sections. In the 1990s, he was political editor, financial editor and head of investigations at the Financial Times, where he won the ‘What The Papers Say’ award for investigative journalism. His award-winning blog can be found at www.bbc.co.uk/robertpeston.

More About Robert Peston
Add To Wishlist
Buy from our bookstore and 25% of the cover price will be given to a school of your choice to buy more books.