Simon Spurrier has written for comics and so that punchy directness comes through in this, his first novel; that fast-paced, visual element which he uses in this inventive tale works beautifully.  It’s a gripping, contemporary story of contract killings and intrigue, with a supernatural twist.  From a simple start it draws the reader into a dark world just under the surface of our own.  As hit-man Michael’s inner conflict increases, so does the confusion until the startling climax becomes inevitable.  Quirky, dirty, gripping, a satisfying read.

Michael Point doesn`t seem anything special. He dresses conservatively, is thoughtful, methodical and well spoken. He also happens to kill people for money. He does it quietly, efficiently and professionally. But not in London, never in London, that`s where he lives. You see for Michael, It`s All About The Money. But things are just about to go pear shaped for him. His hits start coming back to life and trying to kill him. That makes things messy, very messy, and Michael doesn`t know if his conscience has started caving in under all the pressure and he`s going mad, or if maybe he`s just become some sort of divine agent in a cosmic battle between good and evil for the soul of the entire universe. Maybe…

What To Read After Contract 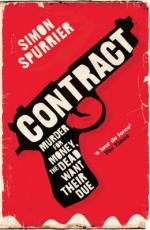 Simon Spurrier was born in 1981. After completing a degree in Film and Television Production at S.I.A.D, he was awarded a screenplay bursary with the National Academy of Writing and found employment with the BBC as an Art Director. He has since become a key contributor to the UKâ€™s foremost Graphic Novel ideas-factory 2000AD and has written several licensed works for The Black Library and Abaddon Press. He lives in North London and spends his days abusing his neighboursâ€™ unencrypted wireless Internet connections.

View All Books By Simon Spurrier