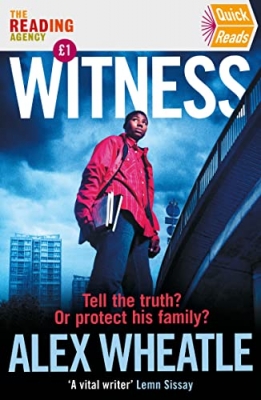 To tell the truth? Or protect his family?

Cornell is having a bad time. Kicked out of secondary school for a fight he didn't start, he finds himself in a Pupil Referral Unit. Here he makes friends with one of the Sinclair family. You don't mess with the Sinclairs, and when Ryan Sinclair demands Cornell comes with him to teach another student some respect, Ryan witnesses something that will change his life.

Torn between protecting his family and himself, Cornell has one hell of a decision to make.

This is published as part of the Quick Reads series, which aims to share the joy of reading with adults who are improving their literacy. It is Alex Wheatle at his best: a thrilling, pacy story that is full of moral complexity and insight into gang violence.

Born in 1963 to Jamaican parents living in Brixton, ALEX WHEATLE spent most of his childhood in a Surrey children's home. He returned to Brixton in 1977 where he founded the Crucial Rocker sound system and performed his own songs and lyrics under the name of Yardman Irie. He spent a short stint in prison following the Brixton uprising of 1981. Following his release from prison he continued to write poems and lyrics and became known as the Brixton Bard. Alex's first novel, BRIXTON ROCK, was published to critical acclaim in 1999. Five more novels, EAST OF ACRE LANE, THE SEVEN SISTERS, ISLAND SONGS, CHECKERS and THE DIRTY SOUTH followed, all highly praised. His books are on school reading lists, Alex takes part in Black History Month every year, works with Streatham Youth Community Trust, helping to run a homework club. He is representing English PEN, and tours the country with his one-man show, UPRISING. He teaches in various places including Lambeth College, holds workshops in prisons and is frequently invited to schools to speak to students, inspiring in them with his own story a passion for literature. Alex also appears regularly on BBC1's The One Show and on radio. In the autumn of 2010 he wrote and performed his own one-man autobiographical show for Tara Arts, UPRISING, and took the performance on tour in October 2012. He was at Harrogate Crime Writing Festival in July 2011. He was awarded an MBE in the Queen's Birthday Honours list for services to literature in 2008. A favourite of reading groups and libraries, he is UK's most read Black British author. He is working on a non-fiction book about Black Britain and on more Young Adult novels. He lives with his family in South London.

More About Alex Wheatle
Add To Wishlist
Buy from our bookstore and 25% of the cover price will be given to a school of your choice to buy more books.