An intensely satisfying and entertaining read that opens up the amazing world of ants, you may never look at them in the same way again.

What a fabulously readable and eye-opening book this is. With experts guiding your way, visit the amazing world of ants as they build, raise, grow, and hunt, raid and devour. I’ve always been enthralled by ants and have watched in fascination as they purposefully march their way through life. I’ve also wondered what happens to the lone lost explorer who ends up on your clothing potentially miles away from home, well I found out the answer to this and learned a whole host of other interesting facts in Empire of Ants. Yet this isn’t a data and statistic gala, the writing duo of Susanne Foitzik and Olaf Fritsche have ensured an engaging and absorbing read. One of the first things we are told is that: “If all the ants suddenly disappeared, terrestrial ecosystems across the word would be on their knees… Without ants, the natural world would suffer a long period of instability and would never look the same again”. They’re important then, these bustling ants who exist and create and invent, there’s plenty to learn as we are introduced to them by biologist Susanne. There are so many similarities with humans, and yet their structure could quite easily sit in the realms of fantasy. Empire of Ants is an intensely satisfying and entertaining read that opens up a whole new world.

Ants have been walking the Earth since the age of the dinosaurs. Today there are one million ants for every one of us.

The closer you get to ants, the more human they look: they build megacities, grow crops, raise livestock, tend their young and infirm, and even make vaccines. They also have a darker side: they wage war, enslave rivals and rebel against their oppressors. From fearsome army ants, who stage twelve-hour hunting raids where they devour thousands, to gentle leaf-cutters gardening in their peaceful underground kingdoms, every ant is engineered by nature to fulfil their particular role.

Acclaimed biologist Susanne Foitzik has travelled the globe to study these master architects of Earth. Joined by journalist Olaf Fritsche, Foitzik invites readers deep into her world - in the field and in the lab - and will inspire new respect for ants as a global superpower.

Fascinating and action-packed, Empire of Ants will open your eyes to the secret societies thriving right beneath your feet.

A fascinating insight into the world of one of our most common insects. I was hooked!

This popular science book opens up the hidden world of ants in an engaging, accessible way. The authors' stories of their research exploits combined with fascinating insights into the ant biology and colony behaviours have led to the creation of an enjoyable, intriguing book about an important species in our natural world.

I would recommend this book to anyone, even if biology or zoology are not really your thing.

From budding myrmecologists to armchair enthusiasts to the completely uninitiated - this is a fascinating peek into the thriving societies operating in world beneath our feet.

What a fantastic read! Empire of Ants is a delightfully readable and entertaining look into the world of these industrious (and often irritating!) insects. Beginning the book with a comparison between humans and ants, the authors describe their societies, structures and relationships. Travelling the world for research they detail the myriad of species from the fearsome bullet ants (a 4.0+ on the Schmidt Sting Pain Index) to the vegan leafcutters. There is a comparison of different colonies, the roles of the Queen Ant, the relative insignificance of male ants and a detailed look at how genetics and evolution have engineered ants to specific roles and habitats. There is plenty of gory detail (bloodbaths involving the enslaved, zombies and self-destructing ants!) and lots of fascinating facts about ants thriving but mostly hidden worlds. Written in a jaunty style, there is a great balance of entertainment and expertise. For budding myrmecologists there is much to inform and enjoy but this is also a book for anyone who wants to learn more about the extraordinary world operating beneath our feet.

A fascinating exploration into the complex world of ants.

Empire of Ants is an incredibly readable book. I was surprised, taking into account the subject matter, how easy it was to get engrossed by it. There is almost a conversational tone to it. It is almost as if someone is chatting away to you in the comfort of your own living room, rather than listening to a serious, academic lecture. I think this is not just due to the skill of the authors, Susanne Foitzuk and Olaf Fritsche, but the expertise of the translator, Ayacucho Turkoglu. An awful lot of research and time has gone into this work. This is evident by the amount of references named at the back of the book.

The subject matter, the world of ants, is explored in a manner that is somewhat humorous and strangely easy to relate to. The sub-title for the section on Army ant queens and the change of size before and after laying eggs is ‘The Queen is dieting again’. Comparisons are made with the film, The Magnificent Seven and the raiding Gnamptogenys hartmani (crooks), Sericomyrmex (farmers) and Megalomyrmex (heroes). It is strange sometimes how it starts a section, ‘Golfers Beware: There’s a New Kid in Town’, by talking about a red imported fire ant who creates problems for American golfers, then moves on to a mixed talk on evolution and invasive species.

An intriguing and informative book. Definitely worth a read for anyone interested in natural history.

A fabulous introduction to the world of ants. From farmers to slave owners, victims of parasites to master navigators, this book tells their story in a highly entertaining and informative way.

Although I already knew a bit about ants, having read a couple of really good books years ago, I still found quite a few new things in the book.

The book is divided into chapters that start out with general information about ants and their lives, moving onto chapters covering specific behaviours. Each chapter also compares ant behaviour to human behaviour, not with the idea of humanising the ants, but to show that they have developed this behaviour over millions of years - we are doing nothing that hasn't been done before.

From learning about how queens can live for 30 years, and don't leave the nest once they found it, to ants farming aphids and fungi, acting as slave owners (of other ants), being tricked by other insects, creating antibiotics, moving house, living in trees, forming bridges and rafts, being master navigators …the list of things covered seems to be almost endless. It is all written in a way that needs no prior scientific knowledge.

It is engaging, and not at all dry and I would thoroughly recommend the book to anyone interested in ants that doesn't know much about them.

Beautifully written and filled with mind-boggling wonders, Empire of Ants is a delightful tribute to the minuscule but extraordinary world of creatures that live right beneath our feet. -- Dave Goulson, author of A STING IN THE TALE

Thrilling, compellingly readable, and paradigm-shattering. A gateway to a strange but strangely familiar society - a complex international community, ruled by stern, exotic, resonant and repercussive stories. -- Charles Foster, author of BEING A BEAST

Both expert and entertaining, Empire of Ants will leave you in no doubt that these wonderfully strange little animals are among the most impressive of all our fellow creatures. -- David Barrie, author of INCREDIBLE JOURNEYS

Are we the sole rulers of this world? This wonderful book brings our tiny co-rulers alive via an engaging description of ants' cities, hard work, warfare, royalty, diversity, and ecological impact. These insects may be quite different from us, but their societies are eerily similar. -- Frans de Waal, author of MAMA'S LAST HUG

If you ever wanted to travel to an exotic planet filled with strange life forms - you've arrived. Every page of Empire of Ants brims with astonishing stories and facts that could never have been invented by a human mind. -- Carl Safina, author of BECOMING WILD

This is a charming tribute to the 'little creatures that run the world.' A very personal selection of the many wonders discovered in the world of ants that introduces readers to their fascinating lives. -- Bert Hoelldobler, co-author of THE SUPERORGANISM and Pulitzer Prize-winning THE ANTS

Susanne Foitzik and Olaf Fritsche have you enter a whole new universe worthy of a science fiction novel, yet it exists right at your feet. -- Mark W. Moffett, author of THE HUMAN SWARM and ADVENTURES AMONG ANTS

This highly entertaining book makes it clear that Mother Nature has been having a wildly fun time moulding these social insects into an abundance of behavioural and physical expression. -- Jonathan Balcombe, author of WHAT A FISH KNOWS and SUPER FLY 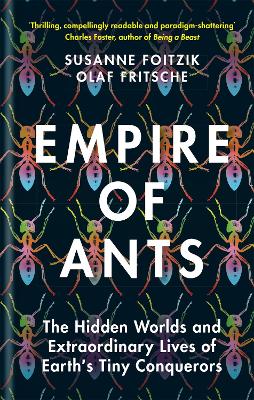 Susanne Foitzik is an evolutionary biologist, behavioral scientist, and international authority on ants. After completing her PhD in ant evolution and behavior and conducting postdoctoral work in the US, she became a professor at Ludwig Maximilian University of Munich. She now holds a chair at Johannes Gutenberg University in Mainz, Germany, where she studies the behaviors and social evolution of ants, with a particular focus on slave-making ants. Her findings have been published in more than 110 scientific papers. Photo credit: Peter Pullowski Olaf Fritsche is a science journalist and biophysicist with a PhD in biology. He was previously an editor ...