LoveReading View on The Lizard

“Alistair Haston, student of moral philosophy and German no more. I was starting over, shaking things up.” As things turn out, innocent Alistair experiences a whole lot more than a shake up in The Lizard, Dugald Bruce-Lockhart’s audaciously murderous debut, when he heads to the Greek Islands in search of his ex-girlfriend and finds himself stitched-up to the nth degree.

Alistair has barely begun his trip when his passport and cash are stolen after getting drunk with charismatic Aussie Ricky. Alone and penniless, a reencounter with Ricky offers him a lifeline when the Aussie gets him a job drafting tourists to pose for his employer, a wealthy German artist called Heinrich. Alistair seems to have fallen on his feet – Heinrich’s villa is palatial, the parties are wild and the money is great. Swept up in the sex, drug and alcohol fuelled fever of the villa, Alistair casts off his conservatism and does what’s expected of him, until the morning he wakes to find the villa messy with party detritus and empty of people. “What the hell had happened?” he wonders before a police car pulls up. A tourist has been murdered and Alistair is the number one suspect.

And so begins a dangerous cat and mouse game during which Alistair is arrested, escapes and goes on the run. The sense of paranoia is palpable as the novel plots Alistair’s transformation from a naïve, lovelorn student to a fugitive prepared to do anything to save his skin, with the body count rising to Tarantino-esque proportions. The heady cocktail of kaleidoscopic plot twists and slick writing make this a sure-fire winner for fans of fast-paced thrillers.

Listen to Dugald reading The Lizard

Obsessed with his ex-girlfriend, Alistair Haston heads off to Greece, where she is on holiday. Mugged on the harbourside in Paros, he is robbed of everything. So when Ricky a charming Aussie, shows up and offers Alistair a job recruiting tourists to pose for his wealthy boss, Heinrich, a charismatic, German artist, Alistair accepts. He soon realises that it is more than just painting that Heinrich has in mind. Swept away on a tide of wild parties, wild sex, fine food and drugs Haston sheds his reserve and throws himself headlong into the pursuit of pleasure. Until, the body of a missing tourist is found and the finger of blame points to Haston. His world collapses. Arrested but allowed to escape, the body count piles up and Haston finds himself on the run by land and sea on a journey more breathtaking and more frightening than his wildest dreams. 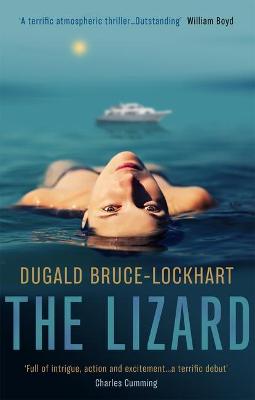 Dugald is a successful actor who trained at RADA and has worked extensively with the RSC, the National Theatre and the Old Vic amongst others. He toured the UK as Hannay in The 39 Step,s appeared as Freddie in the Deep Blue Sea, and has recently finished a two-year stint on stage in the long-running show Mamma Mia. He most recently played Michael Gove in Jonathan Maitland's play The Last Temptation of Boris at The Park Theatre in London. He lives in South London with his family.