LoveReading View on The German House

A fascinating and thought-provoking debut novel where the author focuses on the intimate lives of a family, which in turn opens up the Frankfurt Trials after the Second World War. Set in 1963 Germany, Eva Bruhn is hired as a translator for a war crimes trial, as she learns more about the war, her thoughts expand and she begins to question her parents and examine her childhood. Told in four parts, there are no chapters and I found myself constantly on edge and alert as events, characters and time moved backwards and forwards. The story takes its time to develop, allowing access to the family dynamics and Eva’s transition to understanding. Author Annette Hess is a successful screenwriter (which shows), in her note at the end she thanks the Fritz Bauer Institute in Frankfurt where she researched the first Auschwitz trial. She directly quoted from a number of participants at the trial, and merged other statements, so bringing an incredible feeling of reality to a compelling novel. Originally published in German, the translator Elisabeth Lauffer talks of her sense of responsibility to do justice to the story, to translate faithfully and thoughtfully the testimonies of Auschwitz survivors. This is an incredibly moving novel, it examines pack mentality and highlights how quickly humanity can collectively move on, while individual memories are left forever scarred. For a number of reasons The German House isn’t an easy read, it is powerful though, and I have chosen it as a Liz Robinson pick of the month.

What if everything your family ever told you was a lie?

At the war's end, Frankfurt was a smoldering ruin, severely damaged by the Allied bombings. But that was two decades ago. Now it is 1963, and the city's streets, once cratered are smooth and paved. Shiny new stores replace scorched rubble. For twenty-four-year-old Eva Bruhn, World War II is a foggy childhood memory. Eager for her wealthy suitor, Jurgen Schoorman, to propose, Eva dreams of starting a new life away from her parents and sister. But Eva's plans are turned upside down when an American investigator, David Miller, hires her as a translator for a war crimes trial.

As she becomes more and more involved in the Frankfurt Trials, Eva begins to question her family's silence on the war and her future. Why do her parents refuse to talk about what happened? What are they hiding? Does she really love Jurgen and will she be happy as a housewife? Though it means going against the wishes of her family and her lover, Eva, propelled by her own conscience, joins a team of fiery prosecutors determined to bring the Nazis to justice - a decision that will help change her country forever. 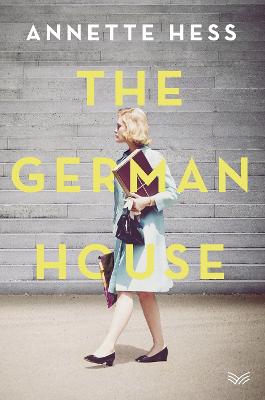 Annette Hess grew up in Hanover and currently lives in Lower Saxony. She initially studied painting and interior design, and later scenic writing. She worked as a freelance journalist and assistant director, before launching a successful career as a screenwriter. Her critically-acclaimed and popular television series Weissensee, Ku'damm 56 and Ku'damm 59 are credited with revitalizing German TV. She has received numerous awards from the Grimme Prize to the Frankfurt Prize to the German Television Prize. The German Inn is her first novel.