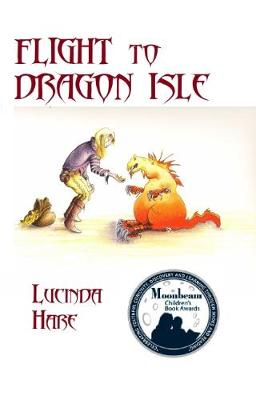 Silver medal Winner at the International Moonbeam Children's Awards 2013 for Best Book Series.    Battles and adventures aplenty in this second book in the Dragonsdome Chronicles series which began with The Dragon Whisperer and is followed by Dragon Lords Rising.

A brutal war against the united hobgoblin tribes rages, and Quenelda longs to accompany her hero Dragon Lord father into battle. But when the elite Stealth Dragon Services is ambushed and defeated - due to the dark treachery of the Grand Master - and her father is presumed dead, the Seven Sea Kingdoms are thrown into turmoil. Evil plots swirl - with even Quenelda's own beloved dragon in mortal danger - but Quenelda finds a magical, secret solace at the heart of the fabled fortress Dragon Isle. Can she use her new powers to set the tide of victory turning against the hobgoblins?

Lucinda Hare is the author of the Dragonsdome Chronicles, and her heroine Quenelda’s passion for dragons is based on Lucinda’s childhood in rural East Lothian; it was there that her lifelong passion for animals – from earwigs to elephants – history, reading and drawing began.  She and her family share their Edinburgh home with a large number of rescued animals. She adopts the old and ill, cats with special needs and animals with behavioural problems, and friends often comment that she can weave magic and talk to the animals – a real life ‘whisperer’!

It should be no surprise, then, that the characters at the heart of The Dragonsdome Chronicles - apart from sorcerers, gnomes, dwarves and trolls – are in fact dragons; dragons with their own language and character, from the teasing Chasing the Stars to those with serious attitude like the carnivorous battledragon, Two Gulps & You're Gone.  The dragons owe the inspiration for their names to Native American culture, and their characters draw on some of her large adopted family of animals.

Lucinda was able to return to those childhood passions, and very soon their house in Lasswade filled up with ever more rescued animals (dogs, cats, rabbits, guinea pigs and ex-battery hens), books, and pastel and watercolour drawings and illustrations covered in dirty paw marks – the cats do always like to help out!  This led to Paul’s suggestion that she should try putting pen to paper – or rather, given Lucinda’s chaotic writing style, get a laptop and start writing.  The result was a rapid explosion of ideas and the start of The Dragonsdome Chronicles.

Lucinda was born in Edinburgh and spent her childhood in rural East Lothian, where she spent much of her time roaming the beaches and woods, watching deer, pheasants, geese and rabbits, and listening to the croon of eider ducks float down the Firth of Forth on the evening breeze.  It was then that her lifelong passions for animals – from earwigs to elephants – history, reading and drawing began.

You can find Lucinda's blog thedragonwhispererdiaries.blogspot.com

More About Lucinda Hare
Add To Wishlist
Buy from our bookstore and 25% of the cover price will be given to a school of your choice to buy more books.

The Witches of Chiswick

The Somnambulist and the Psychic Thief