LoveReading View on One Step Beyond

One Step Beyond is based on a time period and sub-culture that I am unfamiliar with (80's Skinhead culture - although no date is specifically mentioned). The book uses the tried and tested body swap plot, this book explores social discord and conflict that feels all too common at the moment. I found the concept of Mal and Ashraf's swap allows the other person to “walk a mile in the other person’s shoes” really intrigued me. I found this book a simple but enjoyable read and I thought that it had good attention to detail. I took an instant disliking to Mal, as we’re supposed to, but having the synopsis in mind, I wanted to persevere and see him change. As the book progressed my frustrations changed direction and I found Ash quite reedy. These are a sign to me of good character construction. I think I preferred Phil and Kate out of all of the characters and occasionally had to pay a bit more attention to make sure I had the right characters in mind -Arf, Ash, Travis and Trevor are quite similar names used in the book and I had to double-check I had read the name right once or twice. Overall, I enjoyed the book and finished it in one day, and I would recommend it to others.

One Step Beyond Synopsis

Mal is a right-wing skinhead who lives in a world fuelled by hate and anger, both things he has in abundance.

Ashraf is a lonely Asian boy who’s only two friends work in the Comic Cave. Kate is the focus of his attention but shuns his clumsy advance. This, together with his failings at school and his dismal home life, push him to rock bottom. Ejected onto the streets as a race riot steps up a gear, he meets a gang of angry skinheads hell-bent on causing him harm…

Malcolm and Ashraf’s worlds collide, but neither expected the events that would follow, or the changes they would both go through. 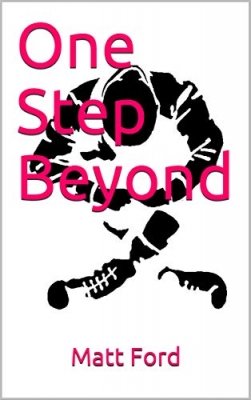