If you like your books to be a little twisted, dark, and provocative, then *waves frantically* stop right here!

If you like your books to be a little twisted, dark, and provocative, then *waves frantically* stop right here! A suicide cult suddenly makes headlines, the members have no idea about each other, but one day, drop everything, and end their lives. Will Carver has the ability to create some truly disturbing, challenging, and fabulously readable books (do check out Good Samaritans). However, please be warned, this could be a really difficult read for some. The prologue is intruiging and then some, chapter one is heart in mouth time, chapter two slammed home and made me think in a different way. Time played backwards and forwards, ripping open holes into lives, allowing me to see, to witness, but did I understand? Little snippets made me pause, I flinched, I cringed, my thoughts probed to and fro. This is one book where I had absolutely no idea where it was going, and I loved that. Nothing Important Happened Today is clever, incredibly simple, yet full on reading pleasure.

When strangers take part in a series of group suicides, everything suggests that a cult is to blame. But how do you stop a cult when no one knows they are members? A shocking, mesmerisingly original and pitch-black thriller from the critically acclaimed Will Carver.

Nine people arrive one night on Chelsea Bridge. They've never met. But at the same time, they run, and leap to their deaths. Each of them received a letter in the post that morning, a pre-written suicide note, and a page containing only four words: Nothing important happened today.

That is how they knew they had been chosen to become a part of The People Of Choice: A mysterious suicide cult whose members have no knowledge of one another.

Thirty-two people on that train witness the event. Two of them will be next. By the morning, People Of Choice are appearing around the globe: a decapitation in Germany, a public shooting at a university in Bordeaux; in Illinois, a sports team stands around the centre circle of the football pitch and pulls the trigger of the gun pressed to the temple of the person on their right. It becomes a movement.

A social media page that has lain dormant for four years suddenly has thousands of followers. The police are under pressure to find a link between the cult members, to locate a leader that does not seem to exist.

But how do you stop a cult when people do not know they are members?

One week after the two witnesses jump to their deaths, twenty letters are opened across London that all say the same thing. Later that day, the strangers all know to meet at Tower Bridge. The Teacher will jump first. The Detective will be last…

A shocking, mesmerisingly original and pitch-black thriller, Nothing Important Happened Today confirms Will Carver as one of the most extraordinary, exciting authors in crime fiction.

What To Read After Nothing Important Happened Today 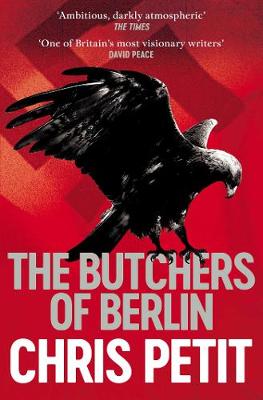 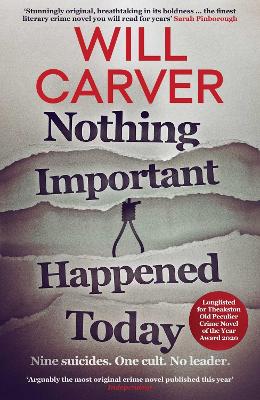 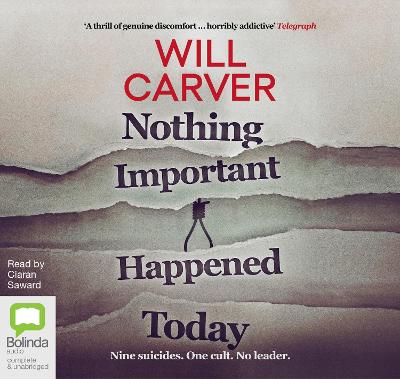 Will Carver is the international bestselling author of the January David series. He spent his early years in Germany, but returned to the UK at age eleven, when his sporting career took off. He turned down a professional rugby contract to study theatre and television at King Alfred’s, Winchester, where he set up a successful theatre company. He currently runs his own fitness and nutrition company, and lives in Reading with his two children. Will’s latest title published by Orenda Books, Hinton Hollow Death Trip was longlisted for the Not ...

More About Will Carver

More Books By Will Carver

View All Books By Will Carver