Part of the Frank Elder Series

Frank Elder's last case could be the one that breaks him for good.

The heavy manacles around the girl's wrists, perhaps not surprisingly, looked very much like the ones that had been found on the studio floor. For a moment, she had a vision of the chain to which they were attached being swung through the air, taking on force and speed before striking home. Then swung again.

When his estranged daughter Katherine appears on his doorstep, ex-Detective Frank Elder knows that something is wrong.

Katherine has long been troubled, and Elder has always felt powerless to help her. But now Katherine has begun to self-destruct; the breakdown of her affair with a controversial artist, known for his pornographic paintings, has sent her into a tailspin.

But when the artist is found murdered in his studio, suspicion falls on Katherine. The vultures are circling.

And as Elder struggles to protect his daughter and prove her innocence, the terrors of the past threaten them both once more...

The 79-year-old Harvey has made it clear that Body & Soul is his last novel, and what an excellent farewell it is .... Elder and Resnick are both greats of British crime fiction. - The Times, Book of the Month

An expertly plotted and moving final act for an old-school investigator of the best sort, from a true master of the genre - Guardian Books of the Month

Few writers have even approached Harvey's grasp of atmosphere which, mingled with some sharpish social comment and utterly believable characters, makes them a must read - Crime Review

A masterpiece from a master of the genre - Mark Billingham

Body and Soul is a clever thriller ... that will leave you stunned and staring at the page in disbelief. - Evening Standard 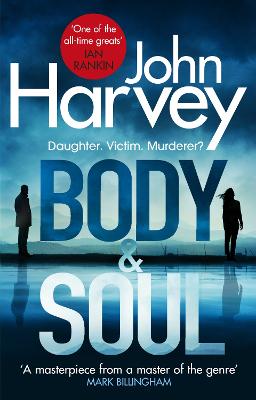 John Harvey lived and worked in Nottingham during the strike and witnessed the life at first hand.  His depiction of the violence and anger is both wholly authentic and riveting.  He is, as the Guardian has said ‘a master craftsman.’   Loved by critics, readers and authors alike, John Harvey’s books have sold over 1 million copies and have been translated into more than 20 languages.  The first Charlie Resnick novel, Lonely Hearts, was named by The Times as one of the '100 Best Crime Novels of the Century'. His first novel featuring Detective ...

View All Books By John Harvey