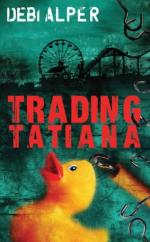 Sparkling, fast-paced and blackly comic, Trading Tatiana is the story of an utterly loveable - if somewhat unlikely - good Samaritan, and her adventures through the seedier side of London. From the author of 'Nirvana Bites'.

Jo Cooper leads an uneventful life, selling jewellery on a Greenwich market stall, babysitting her neighbours' kids, and trying not to pay too much attention to the noises made by the S&M devotees who live next door. Home for Jo is a top floor flat in the Old Kent Road council block, Boddington Heights. An ex-drug-addict herself, she has a penchant for rescuing people: waifs and strays, a Ukranian refugee whose cause she champions and the man in buttock-less leather trousers she finds chained to the roof of her building.

But Jo's white-knight tendencies land her in trouble when a day-trip to Brighton ends with her helping a frightened girl to escape from some Russian thugs. The mysterious woman overturns Jo's life, plunging her into the world of illegal immigration and prostitution, where human lives are ruthlessly traded, and violence and distrust are rife. But just who exactly is it that Jo has saved? Is she Irena, a circus performer with the Flying Poliakovs, or Tatiana, a teenage prostitute, betrayed by her brother and on the run from a dangerous gang? Either way, her arrival in Boddington Heights means that Jo's life will never be the same again.

Debi Alper lives in South London with her young family. She is a finance officer at London Advice Services Alliance and a part-time wedding photographer. Trading Tatiana is her second novel.

More About Debi Alper
Add To Wishlist
Buy from our bookstore and 25% of the cover price will be given to a school of your choice to buy more books.

Summer of the Dead

You Will Never Find Me