What We Do For Love

LoveReading View on What We Do For Love

This highly readable thriller-cum-domestic drama tingles with intrigue when a single mother is drawn into a world of violence.

Single mom Nicole Adams is approaching forty and entirely focused on her sixteen-year-old son, Justin, and her budding career as a ceramicist. Nicole’s story opens at a thrillingly pivotal moment in her life - the Contemporary Crafts Museum of Los Angeles has just offered her a place in their upcoming show. “This was my chance, an incredible opportunity. I was an artist!” she enthuses. Pivotal Moment Number Two takes place shortly after, when Justin brings home a girl for the very first time, Daniela, who was “as young and fresh and lovely as a rosebud from my garden”. A girl whose presence was also entirely unexpected, for Justin had never previously shown any interest in the opposite sex. More bombshells follow, first when Justin announces that Daniela needs a place to stay, and second when he reveals that she’s pregnant.

Nicole is an appealing character many readers will for, and her predicaments pose some “what would I do in her position?” questions for readers too. It’s also well-paced, and includes engaging sub-plots around her sister and relationship history.

What We Do For Love Synopsis

Thirty-eight-year-old Nicole Adams has given up on finding love. The single mother focuses on the two things she cherishes most—her sixteen-year-old son Justin and her art—while relying on the support of her friends Mike and Jamie and her loyal sister Caroline.

When she convinces a prominent Los Angeles museum to feature a large-scale installation of her ceramics work, she thinks her life has finally turned a corner.

Then Justin brings a girl, Daniela, home to spend the night. Daniela’s angry parents have thrown her out of the house because she’s pregnant with Justin’s child. Shattered, Nicole takes Daniela in and by doing so is drawn into the inner circle of Daniela’s family and a frightening world of deceit and violence.

Nicole struggles to keep life going as normal. Forced to deal with people she doesn’t trust or like, fearful for the future of both her son and the grandchild they’re expecting, Nicole wonders if she can do what she tells Justin to do: always have faith in yourself and do the right thing.

What We Do For Love Reader Reviews

I read this novel over two nights and found it very easy going. The story of a disfunctional family, an alternative lifestyle, and their problems was nicely presented, whilst covering the topic of domestic abuse is always a tear jerker. Full review

What We Do For Love Press Reviews

“If Lorelai Gilmore of Gilmore Girls was dropped into a thriller, it might resemble this appealing novel.” --Kirkus Reviews 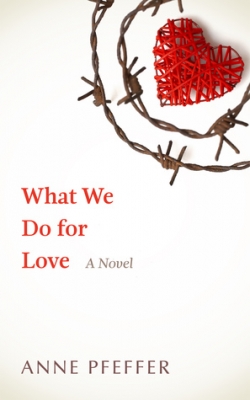