Part of the The Josie King Thrillers Series

LoveReading View on The Unborn

An exciting thriller with a lot of surprises.

I wasn’t expecting this crime thriller to be as good as it was, especially taking into account that Robin Driscoll is more well known as being the writer for Mr. Bean. The Unborn, his first novel in the Josie King Detective series, is a relatively short novel and only took me a day to read once I had started it. It is a real page-turner.

The title, The Unborn relates to embryos and foeti that are aborted. The crime thriller deals with a religious fanatical group, Nondum Natus, who regard the termination of a pregnancy to be a horrendous sin. Early on in the book, Josie King, the main character, a police detective, fails to shoot someone who is about to kill her father, a police commissioner. This leads her on the path to vengeance and to attempt to solve a case her father had previously been obsessed with, to do with the Nondum Natus. Josie is a strong, determined, fearless character. Sometimes she appears almost a bit too much so to be real. Her character appears to be almost unstoppable.

All in all, The Unborn has a fast-paced plot and a multitude of twists and turns to keep the reader on his or her feet. Great book which I would definitely recommend.

From the world of New York's Catholic Cathedral, to the secret and treacherous brotherhood of a Black Forest monastery, to a Vatican conclave to elect a new pope. This is the second novel from Robin Driscoll of Alas Smith and Jones and the Mr. Bean TV series and films. Following the success of Rough Music, Robin has crafted a thriller full of verve and pace and introduces the fearless and Josie King, as she delves into an underworld of religious fanaticism on a personal crusade for vengeance. A breathless, compelling thriller with sinister religious fanatics, an engaging heroine, a shocking crime and a dark secret, The Unborn is guaranteed to keep you awake deep into the night, Lisa De Silva, Sussex Living Magazine.

I really enjoyed this, thought it had a good fast pace and I was engaged in the story from beginning to end. I loved the characters, especially the lead Josie King, I thought she was believable and fun to follow. I thought the story was well written and I enjoyed the authors sense of humour. I will definately be looking to read more by this author. Full review

The Unborn is a fast-paced read with an action-packed plot focusing on religious fanaticism and a sinister brotherhood set on vengeance. Author Robin Driscoll grabbed my attention from the start with his intriguing prologue featuring an assembly of monks. Full review 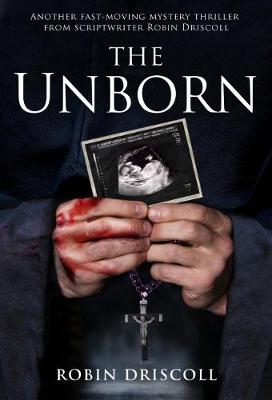 Robin Driscoll is a British actor and writer, best known as a writer of Mr. Bean. He and Rowan Atkinson are close friends; he appeared with Rowan Atkinson in Laughing Matters (1992) - Visual Comedy, a documentary on the mechanics of visual humour. As an actor, he has appeared in episodes of television shows such as Only Fools and Horses ( The Jolly Boys' Outing ), Murder Most Horrid, Dear John, Alas Smith & Jones, Wilderness Road and The Fast Show. He has now turned his hand towards writing books dealing with fast-paced crime in New York courtesy of his illustrious female detective, ...