LoveReading View on The Pact

A brilliant, gritty, well plotted second novel from Roberta Kray. When Eve Weston’s brother is targeted in jail and badly beaten Eve makes a deal with another con to get him protection but the man she asks for help, Cavelli, asks that she do whatever he asks of her in return. Soon her apartment is being broken in to, her ex-husbands flat is ransacked, people start getting murdered and it becomes apparent that someone wants something Eve has got, the only problem is she doesn’t know what it is. Propelled on by great plot development and believable well rounded characters this is a real page turner and one that we highly recommend. If you enjoy this title you might also like to read Roberta Kray's previous novel, The Debt.

Eve, the 34 year old daughter of recently deceased conman Alexander Weston, knows a good deal when she sees it - and this one doesn't even come close. However, with vulnerable brother Terry being beaten in jail, she can't afford to be fussy. She needs to organise protection for him, and fast. The intimidating and powerful con Cavelli seems the perfect solution, but how high a price is he going to exact? She may as well be forming a pact with the Devil.

A break-in, followed by a vicious assault, soon makes Eve question the wisdom of her choice.

Cavelli is leading her straight into Hell. Suddenly, her own life is in jeopardy; there's a psychopath lurking in the shadows and he's prepared to kill to get what he wants. With two men dead already Eve is forced to turn to the past to find the answers she so desperately needs.

There's only one problem. Time is running out. 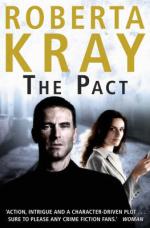 Roberta Kray was born in Southport in 1959.  She worked in publishing and media research in London for fifteen years.  In early 1996 she met Reggie Kray and they married the following year.  Her first book, A Man Apart, was a biography of her husband.  Through her marriage to Reggie Roberta has a unique insight into the inner conflicts of a long-term prisoner. She lives in Norfolk.

View All Books By Roberta Kray