LoveReading View on The Fire Court

A captivating and absolutely thrilling historical tale that sits as a perfect sequel to the first in the series The Ashes of London. Please do start with the first book, it is a stunning read and sets the characters and scene so beautifully. After the Great Fire of London a court is established to judge the cases of discord between landlords and tenants. Suspicious deaths appear to link to the Fire Court, and as James and Cat attempt to find answers, their individual stories become more closely intertwined. After the drama and sheer visual spectacle of the first book, I did wonder how on earth the series would continue, and it is safe to say with great aplomb. The intricate plot immediately wormed its way into my head, slicing, enthralling, and sharply focused. There is one particularly unexpected and shocking moment that quite literally stopped my whole being, I sat in for a moment in silence before continuing, desperate to know more. Will you feel the same, will the words travel from the page, trap your feelings and hurl your thoughts in the air? This is a series that could run and run, The King’s Evil is already calling to me and quite simply can’t arrive quickly enough. The Fire Court has become part of a must-read series for me, it is highly recommended and one of my picks of the month.

From No.1 bestselling author Andrew Taylor comes the sequel to the phenomenally successful The Ashes of London.

A time of terrible danger... The Great Fire has ravaged London. Now, guided by the Fire Court, the city is rebuilding, but times are volatile and danger is only ever a heartbeat away. Two mysterious deaths... James Marwood, a traitor's son, is thrust into this treacherous environment when his father discovers a dead woman in the very place where the Fire Court sits. The next day his father is run down. Accident? Or another murder...? A race to stop a murderer... Determined to uncover the truth, Marwood turns to the one person he can trust - Cat Lovett, the daughter of a despised regicide. Then comes a third death... and Marwood and Cat are forced to confront a vicious killer who threatens the future of the city itself.

The Fire Court is an excellent sequel to The Ashes of London. A historical novel, rich in authentic detail, with an intriguing murder mystery at its heart - well worth reading! Full review

A historical who-dun-it with a great plot, well-drawn characters and a host of period detail, The Fire Court is an education as well as a great read. Full review

The Fire Court is a beautifully descriptive historical mystery set the year after the Great Fire of London. As a lover of historical novels, this book hit all the right notes for me. Full review

Simply spellbinding,superbly written with characters that you quickly follow through treacherous times Best book I've read in a while. Full review

Marwood and Lovett are back in another fascinating look at London in the time of the Great Fire - read it with a glass of water handy! Full review

A brilliantly compelling sequel to The Ashes of London. This historical murder mystery, set just after the devastating Great Fire of London, reintroduces James and Cat, who risk their lives as a series of murders threaten the city. Full review

An unusual crime novel set in an era about which I knew very little. Full review

Fantastic reading. I preordered The King's Evil before I was halfway through The Fire Court, that's how good it is. Full review

`Andrew Taylor's historical crime novels have proved a benchmark for the genre, and The Fire Court is no exception. Cunningly plotted and movingly written, it's a fascinating portrait of a city, and its people, recovering from trauma' Mick Herron, bestselling author of Slow Horses

`This is how historical crime should be written, with rich authenticity underpinning a twisting plot' The Times

`Marwood and Lovett's search for a killer in the sooty streets of 1660s London is an atmospheric pleasure, full of twists and memorable characters' The Times

`With a fast-moving, complex plot underpinned by solid but unobtrusive research and plenty of drama and intrigue, Taylor brings the 17th century to life so vividly that one can almost smell it' Guardian

`Once again, Taylor combines his detailed research with a deviously twist-laden storyline' Observer

`This gripping mystery is even better than its predecessor, The Ashes of London' Sunday Express S Magazine

`If it were not a superlative crime novel, Taylor's evocative picture of the Great Fire of London, The Ashes of London, could be considered a historical novel of the first order. Its sequel, The Fire Court, is equally impressive' Financial Times

`In addition to a fascinating portrait of the 17th-century city, Taylor offers a father-son relationship that is as touching as it is convincing' Literary Review

`Taylor's sense of time and place are awe-inspiring, the plot is fiendishly clever and beautifully executed and the language is divine' Historica Mag 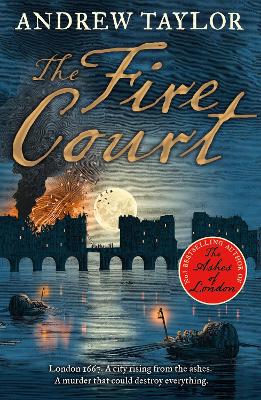