Mary Blight, our unswervingly entertaining heroine, is a salty-talking, salty-acting woman. She picks over the corpses of those drowned off her craggy Cornish cove looking for treasures, such as the fine boots she pulls from a lady’s feet. And then she sees that the body’s earlobes are missing, leading to the national press reporting on the Porthmorvoren Cannibal, and someone saw blood around Mary’s mouth…But it’s Mary who takes in a washed-up stranger and nurses him back to health with the aid of Old Jinny’s curious cure. The man is a Methodist minister who decides to restore the cove to godliness and, observing Mary’s knowledge of the scriptures, he appoint her as Sunday School teacher, to the chagrin of the villagers who are familiar with Mary’s penchant for carnal pleasures. Mary throws herself into her new role but admits in typically honest fashion “I wanted Gideon to save me, but not so that I could kneel at the throne of King Jesus…I wanted him to help me flee the village so I could parade among all the smots in all my finery in a grand town”.

As the villagers scheme against Mary, a nation-wide search for a thief gathers pace, and all the while the writing crackles with energy and atmosphere, making this an exhilarating read with something of a Dickensian spirit in the vibrant characterisation.

A powerful debut exploring the dark side of Cornwall - the wrecking and the drowned sailors - where poverty drove villagers to dark deeds..

Shipwrecks are part of life in the remote village of Porthmorven, Cornwall. And as the sea washes the bodies of the drowned onto the beach, it also brings treasures: barrels of liquor, exotic fruit, the chance to lift a fine pair of boots from a corpse, maybe even a jewel or two. When, after a fierce storm, Mary Blight rescues a man half-dead from the sea, she ignores the whispers of her neighbours and carries him home to nurse better. Gideon Stone is a Methodist minister from Newlyn, a married man. Touched by Mary's sacrifice and horrified by the superstitions and pagan beliefs the villagers cling to, Gideon sets out to bring light and salvation to Porthmorven by building a chapel on the hill. But the village has many secrets and not everyone wants to be saved. As Mary and Gideon find themselves increasingly drawn together, jealousy, rumour and suspicion is rife. Gideon has demons of his own to face, and soon Mary's enemies are plotting against her... Gripping, beautifully written and utterly beguiling, Noel O'Reilly's debut WRECKER is a story of love, injustice, superstition and salvation, set against Cornwall's dark past.

Saving a life gives Mary Blight ideas above her station…ideas that lead to lies…lies that lead to forbidden love…which leads to consequences. Full review

Historical novel looking at the hard life lived by the tough villagers of a remote Cornish village who make their life from fishing, farming and relieving shipwrecks of their cargoes and treasures. Full review

A really interesting tale set in Cornwall's dark past, when ships were lured onto the rocks and their goods scavenged. A sort of cross between Daphne du Maurier and Charles Dickens. Full review

The wild and windswept Cornish coast with its rich history of shipwrecks comes alive in this story of village secrets and ancient superstition. Full review

A novel of a Cornish wrecking village which promises much but spectacularly fails to deliver. Full review 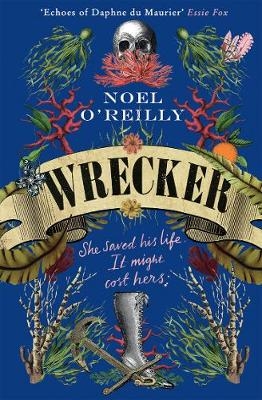 Noel O'Reilly was a student on the New Writing South Advanced writing course. He has worked as a journalist and editor at the international business media company RBI, and is now a freelance writer. This is his first novel. He lives in Brighton with his wife and children.

View All Books By Noel O'Reilly