February 2018 Debut of the Month

A raw, convincing, achingly intimate and individual tale about actions and consequences. 16 years after the death of his brother, Conway wants revenge. When Ray Boy is released from prison, Conway hunts him down in order to kill him, but pulling the trigger isn’t as easy as he thought it would be. There is a sharp edge to the writing, yet the chapters flow from one story to another, initially separate, then linking, writhing and twisting together. William Boyle has created intensely tangible characters, their voices, thoughts and feelings almost become physical, touchable, and are so very, very believable. I highly recommend Gravesend, it is fresh, original, and somehow feels both modern and ancient, as though this story has been lived again and again, and yet is being told for the first time. ~ Liz Robinson

Ray Boy Calabrese is released from prison 16 years after his actions led to the death of a young man. The victim's brother, Conway D'Innocenzio, is a 29 year old Brooklynite wasting away at a local Rite Aid, stuck in the past and still howling for Ray Boy's blood. When the chips are down and the gun is drawn, Conway finds that he doesn't have murder in him. Thus begins a spiral of self loathing and soul searching into which he is joined by Alessandra, a failed actress caring for her widowed father, and Eugene, Ray Boy's hellbound nephew.

'A dark ride but a seriously great ride' ? Willy Vlautin, author of The Motel Life and The Free

'Unforgettable characters, a fist for a plot, and a deeply evocative setting'  ? Tom Franklin, NYT bestselling author of Crooked Letter, Crooked Letter and The Tilted World

'A gripping tale of family, revenge, the strains of the past and the losses that never leave us' ? Megan Abbott, author of Dare Me and The End of Everything 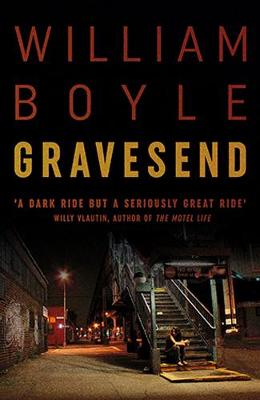