For All Our Sins

LoveReading View on For All Our Sins

An intricate and provocatively stormy tale of twisted, savage revenge. Fiercely driven DCI Claire Winters, needs to be on top form when a fearsomely gruesome murder takes place in a religious community. The first chapter tugged at my emotions, sending conflicting thoughts flying. With a lot of characters, visits to the past, and one particularly mystifying character, T.M.E Walsh sets a knotty series of events in motion. It did take me a little while to settle in and to begin with it almost felt as though I’d joined an established set of stories, however this is the first in the ‘DCI Claire Winters Thriller’ series. ‘For All Our Sins’ unsettles, disorientates and builds to a very intense and dramatic climax. ~ Liz Robinson

For All Our Sins Synopsis

'I couldn't wait to turn the next page - brilliant and what an amazing twist!' - Donna Maguire Years ago there was a silent witness to an act of evil. Now, a twisted killer is on the loose fuelled by revenge. Called to the brutal murder of a priest, it is immediately clear to DCI Claire Winters that the victim's death was prolonged, agonising...and motivated by a lust for revenge. The killer has been clever, there are no clues, no leads. But Claire Winters has never let a killer remain on the streets. Looking for an answer at any cost Claire begins to get closer to the victim's family, but what it reveals turns her murder case into something far more sinister...When one body becomes two, and then three, Claire finds herself in a race against time to connect the dots between a host of devastating secrets, before the killer strikes again. Love M J Arlidge and Angela Marsons? Don't miss For All Our Sins - the first in an addictive new serial-killer thriller series from T M E Walsh. 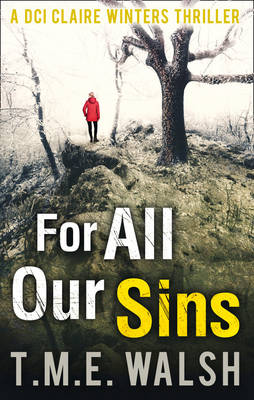 Tania (T. M. E.) Walsh began writing full time after becoming a casualty to the recession in late 2008. She successfully self-published the first two novels in the DCI Claire Winters series in 2013 before being picked up by Carina UK. Tania is currently working on a new standalone novel and a third book in the DCI Claire Winters series. She lives in Hertfordshire with her husband and young daughter.