My Family and Other Animals

Part of the The Corfu Trilogy Series

LoveReading View on My Family and Other Animals

I first read these as a young teen, and as an owner of a variety of animals myself, felt a particular affinity with Gerry. I re-read the books in my early twenties while in Corfu, and of course the age difference added depth and location even more colour. These are books you can read at any age, wonderfully evocative they whisk you back in time. There is a lightness of touch that charms, while the humour delights. Simply gorgeous!

Books in The Corfu Trilogy:

1. My Family and Other Animals

3. The Garden of the Gods

My Family and Other Animals Synopsis

My Family and Other Animals is the bewitching account of a rare and magical childhood on the island of Corfu by treasured British conservationist Gerald Durrell. This tv tie in edition coincides with ITV's six part television series The Durrells. Escaping the ills of the British climate, the Durrell family - acne-ridden Margo, gun-toting Leslie, bookworm Lawrence and budding naturalist Gerry, along with their long-suffering mother and Roger the dog - take off for the island of Corfu. But the Durrells find that, reluctantly, they must share their various villas with a menagerie of local fauna - among them scorpions, geckos, toads, bats and butterflies. Recounted with immense humour and charm My Family and Other Animals is a wonderful account of a rare, magical childhood.

My Family and Other Animals Press Reviews

'Durrell has an uncanny knack of discovering human as well as animal eccentricities.' Sunday Telegraph 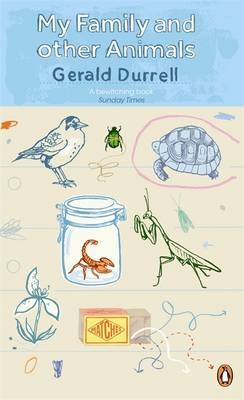 Gerald Durrell was born in Jamshedpur, India, in 1925. He returned to England in 1928 before settling on the island of Corfu with his family. In 1945 he joined the staff of Whipsnade Park as a student keeper, and in 1947 he led his first animal-collecting expedition to the Cameroons. He later undertook numerous further expeditions, visiting Paraguay, Argentina, Sierra Leone, Mexico, Mauritius, Assam and Madagascar. His first television programme, Two in the Bush, which documented his travels to New Zealand, Australia and Malaya was made in 1962; he went on to make seventy programmes about his trips around the world. In 1959 he founded the ...

View All Books By Gerald Durrell