Gregor Jack MP is discovered in a brothel during a police raid and the tabloids have a field day.  It seems he was framed … then his wife is murdered.  This takes Rebus away from his gritty Edinburgh into Fife and the highlands as he investigates the world of a successful man.  But human failings also happen outside a city, infidelity, jealousy, lust are all explored along with loyalty and respect as Gregor Jack’s chums stick up for him.  So Rebus can do ‘upmarket’ too, which is interesting but not as enthralling as underbelly Edinburgh in my mind.  This is not a place to start your Rebus trip.

Gregor Jack, MP, well-liked, young, married to the fiery Elizabeth - to the outside world a very public success story. But Jack's carefully nurtured career plans take a tumble after a 'mistake' during a police raid on a notorious Edinburgh brothel. Then Elizabeth disappears, a couple of bodies float into view where they shouldn't, and a lunatic speaks from his asylum...

Initially Rebus is sympathetic to the MP's dilemma - who hasn't occasionally succumbed to temptation? - but with the disappearance of Jack's wife the glamour surrounding the popular young man begins to tarnish. Someone wants to strip Jack naked and Rebus wants to know why... 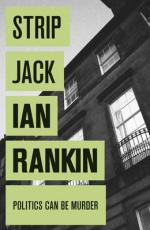