LoveReading View on Kith and Kin

Longlisted for the Orange Prize and well worth a read. A tale of blissed-out hippy 1960s Utopia turned on its head.

'Stevie Davies's KITH & KIN is a moving, scalpel-sharp story of close family relationships...The writing is urgent and surprising, the tale at its most hilarious when it is bitter and bizarre...I couldn't put this book down until I had finished it' Patricia Duncker Mara and Frankie are cousins and best friends, growing up in the stifling atmosphere of Swansea in the 1950s, amid a bickering yet close-knit extended family. But their passionate friendship comes under threat as they reach adolescence in the heady atmosphere of the Sixties - a decade in which the conventions of family and kinship are overturned. Years later, as Mara begins to confront the questions surrounding Frankie's death, she is drawn back into their secret past and the struggles of a generation betrayed by its own values.

'Davies has sown this brand of difficult love throughout KITH & KIN, leaving the reader breathless with its intensity.'
Emma Cowing, THE SCOTSMAN

â€˜A gleaming portrait of family rifts and rivalriesâ€¦Davies greatest skill is in the depiction of childhood memoriesâ€™
Stephanie Merritt, Observer

'What's remarkable about KITH & KIN is Davies' sensual evocation of ... the bonds of blood and love. Beautifully unflinching.'
Daily Mail 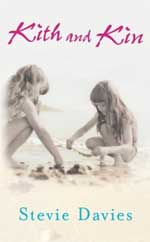 View All Books By Stevie Davies